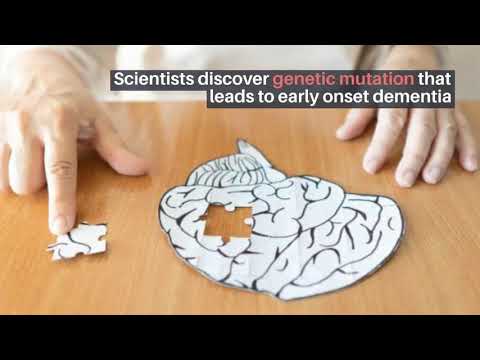 DUBLIN, Ireland — For most dementia patients, mental decline starts to set in later in life. Unfortunately, some people are forced to deal with these issues before even reaching middle-age. A new study has discovered one of the causes for early onset dementia. Researchers in Ireland say a mutation in one specific gene can start affecting patients in their 30s and 40s.

Adult onset Leukoencephalopathy with axonal Spheroids and Pigmented glia (ALSP) is an extremely rare degenerative condition. Patients begin to display psychiatric and behavioral changes before dementia quickly sets in. The study finds the condition is triggered by a mutation in the gene Colony stimulating factor-1 receptor (CSF1R).

Since this form of dementia involves the degeneration of white matter in the brain, scientists believed that immune cells in the brain (microglia) were responsible for these cognitive changes. The team from Trinity College Dublin says their findings reveal the actual culprits are dysfunctional circulating white blood cells.

“This was fundamentally a translational research project, where data obtained from patient samples critically informed the direction of our pre-clinical studies. Our findings have shed light on a novel mechanism of neurodegeneration that may ultimately teach us more about common forms of dementia,” says Dr. Matthew Campbell in a university release.

Breaking down the brain barrier

The study also uncovered that a disruption in the CSF1R gene damages the body’s blood-brain barrier (BBB) as well. This barrier filters out harmful substances so they can’t reach the brain. Scientists treating various conditions in the brain regularly run into trouble with this barrier, as it also blocks most medications from reaching brain cells too.

The damage CSF1R mutations cause alters the structure of the blood vessels in the brain. This causes them to leak and spark even more deterioration in the patient’s brain. Researchers add that dysfunctional white blood cells are the driving force behind BBB breakdowns.

Stopping Alzheimer’s before it starts

Study authors admit there is still no clear treatment for Alzheimer’s disease, the leading cause of dementia. Despite that, the team says their findings give Alzheimer’s researchers new insight into what initially triggers the disease.

“The most exciting aspect of our study is that we have now honed in on a novel pathway that to date has not been explored in great detail. Additionally, our data suggest that modifying white blood cell function may be therapeutically relevant for progressive neurodegenerative conditions,” study first author Dr. Conor Delaney explains.

“It is absolutely critical that we focus our research endeavors on identifying the underlying cause of neurodegenerative conditions. Studies like these will pave the way for better clinical management of our patients and hopefully new medicines to treat the condition,” concludes Colin Doherty, Professor of Epilepsy at Trinity.

The study appears in the journal EMBO Molecular Medicine.

Live near a busy road? It could lead to a common hearing problem25 mins ago

What’s the safest seat on a plane? Unfortunately it’s the least popular one2 hours ago