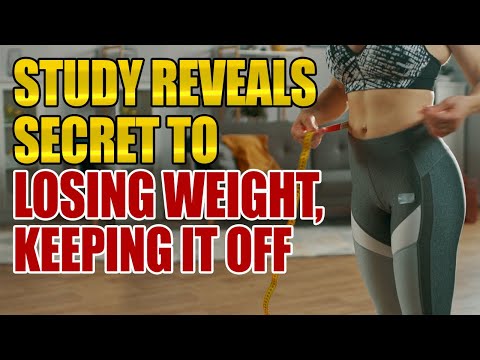 SAN LUIS OBISPO, Calif. — Losing weight is obviously easier for some than it is for others. So, what’s the secret to shedding excess pounds and keeping the weight off? A new study reveals the biggest secret to success may be finding the ability to overcome setbacks in your weight loss plan.

Researchers from California Polytechnic State University used artificial intelligence to analyze the best advice from over 6,000 people who managed to avoid putting weight back on following a successful dieting plan. Previous studies reveal that only one in five Americans are able to maintain their weight loss long-term. For many people, maintaining a healthy weight once they shed the extra pounds proves extremely difficult, leading to yo-yo dieting.

The new study reveals an ultimate “how to guide” for dieters looking to make long-term improvements in their health.

A setback is not a failure

The team studied over 6,000 Weight Watchers (WW) members who lost more than 50 pounds and kept it off for at least three years. Each person answered open-ended questions about their motivations and strategies for keeping the pounds off, specifically what lifestyle changes they had to make.

Researchers then grouped the responses together by topic using machine learning technology — a form of AI. They found that health issues like diabetes and heart conditions, leading causes of death, were common reasons for people wanting to slim down. Concerns over mobility, appearance, and suggestions from friends and family were also driving forces for participants to lose weight.

However, many said perseverance was key to overcoming “inevitable setbacks” which can derail someone’s weight loss plan.

“Setbacks were not described as failures. They were seen as a temporary interruption in their path. Many weight-loss maintainers described getting back on track at the next meal or the next day and measuring overall success based on long-term goals,” Prof. Phelan explains.

Health and appearance are the biggest motivators

The study reveals taking it day-by-day and using workshops to mentally reboot after challenging weeks are also helpful tricks during the weight loss journey. Another essential skill for people to maintain a healthy lifestyle and avoid putting weight back on is consistently monitoring food intake.

Health and appearance rank as the number one motivator for weight loss maintainers, as well as reflecting on their past experiences. The group also viewed losing weight as a challenge, often in relation to buying new clothes, criticism from others, sagging skin, and the effort needed to maintain a healthy lifestyle.

Study authors believe their findings could help weight loss counselors revise the topics they emphasize when working with overweight individuals.

“As a lifestyle interventionist and researcher, I’m excited to think about how to promote perseverance, encourage tracking of intake and make changes in medical status more salient during the weight-loss journey,” Prof. Phelan concludes.

The findings appear in The Journal of The Obesity Society.