NIJMEGAN, Netherlands — A “singing” lemur that lives in Madagascar has rhythm just like humans, according to a new study. Researchers in the Netherlands say the critically endangered Indri indri synchronizes its soothing tones with choirmates, a skill that scientists believed was unique to humans and birds.

The study finds that as soon as one bursts into song, other group members join in and even match the notes! They can even imitate a style resembling off-beat “swing time” sounds of jazz. The discovery sheds fresh light on how humans came to appreciate melodies.

“There is longstanding interest in understanding how human musicality evolved, but musicality is not restricted to humans,” says lead author Dr. Andrea Ravignani from the Max Planck Institute for Psycholinguistics in a media release. “Looking for musical features in other species allows us to build an ‘evolutionary tree’ of musical traits, and understand how rhythm capacities originated and evolved in humans.”

Indris can keep the beat

The indri is one of the world’s largest lemurs. It is about two and a half feet tall, with a striking black and white coat. They live in the rainforest within small family groups and communicate by singing. Unlike humans, the male hits higher pitches while the female has the deeper voice.

Over a period of 12 years, an international team visited the island off the coast of southeast Africa. They found the animal’s songs displayed a beat previously thought unique to humans called “categorical rhythm.” It’s found across human musical cultures, when intervals between sounds have exactly the same duration (1:1) or doubled duration (1:2). This type of rhythm makes a song easily recognizable, even if sung at different speeds.

First author Chiara de Gregorio, a PhD student at Turin University, says the phenomenon has never been seen in a non-human mammal. She suggests the “music-like” rhythms evolved independently among singing species. The last common ancestor of humans and indri lived in Africa 77.5 million years ago.

Rhythm may make it easier to produce and process songs – or even to learn them, says de Gregorio.

The research team recorded songs from 39 indris living in their natural habitat in 20 groups. Members tend to chirp away together in harmonized duets and choruses. The indri songs had the classic rhythmic categories – both 1:1 and 1:2 – as well as a typical slowing down known as “ritardando.”

These kinds of unpredictable patterns appear in several musical traditions and are similar to the timings of an improvising jazz musician. Male and female songs have different tempos, but show the same rhythm. 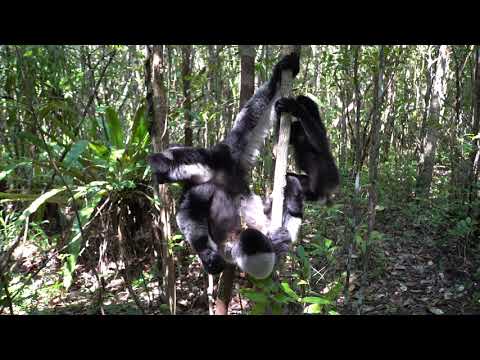 “Categorical rhythms are just one of the six universals that have been identified so far,” Dr. Ravignani reports. “We would like to look for evidence of others, including an underlying ‘repetitive’ beat and a hierarchical organization of beats—in indri and other species.”

The study authors are encouraging other researchers to gather more data on the indri and other endangered species, “before it is too late to witness their breath-taking singing displays.”

Why are the Indri going extinct?

Synchronized singing produces louder songs which may deter other indris from trespassing on an individual’s territory. Madagascans revere the indri and the animal plays an important role in their myths and legends. Unfortunately, they are facing extinction as tens of thousands of miners descend on the island in the Indian Ocean searching for sapphires.

They are destroying the animal’s habitat in the hope of striking it rich by finding rare and valuable gems. Estimates show there are just 10,000 indri still living. Locally, people call the indri the babakoto, which means “little father” or “ancestor of man.”

Indris spend most of their time mating, sleeping, and eating leaves, flowers, plants, and seeds. Madagascar has developed its own distinct ecosystems and wildlife since it split from the African continent 160 million years ago. More than 90 percent of the island’s reptiles, plant life, and mammals exist nowhere else on Earth.