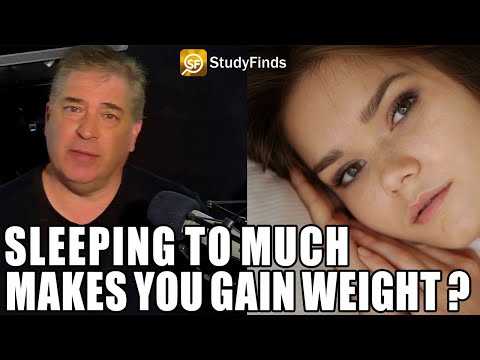 ROCHESTER, Minn. — If you’re feeling the munchies, it might be a sign you’re more sleepy than hungry, according to a new study. Researchers from the Mayo Clinic found a lack of sleep and eating more go hand-in-hand — increasing calorie consumption and adding belly fat.

Previous studies recommend adults sleep seven to nine hours a night. However, over one-third of adults living in the United States get less than that. While “doomscrolling” late at night is one reason behind sleep deprivation, some adults have to stay up because of their work while others can’t sleep due to the light from their electronics.

The current study found that not sleeping enough led to weight gains and belly fat accumulation in young, healthy, and relatively lean people. The increased weight involved gaining a dangerous type of fat known as visceral fat. Unlike the lovely love handles that make up subcutaneous fat, visceral fat is even deeper and surrounds your organs. Excessive visceral fat may lead to organ dysfunction, which can cause heart and kidney problems.

Researchers found that even when you try to catch up on your sleep, like oversleeping on the weekends, there was a decrease in weight but not in visceral fat.

“This suggests that inadequate sleep is a previously unrecognized trigger for visceral fat deposition, and that catch-up sleep, at least in the short term, does not reverse the visceral fat accumulation. In the long term, these findings implicate inadequate sleep as a contributor to the epidemics of obesity, cardiovascular and metabolic diseases,” says principal investigator Virend Somers, MD, PhD, the Alice Sheets Marriott Professor of Cardiovascular Medicine, in a media release.

The researchers studied the sleep and eating patterns of 12 people who were not obese. Participants had four days to adjust to the study environment. Over the next two weeks, people placed in the restricted sleep group slept for four hours a night, while people assigned to the control group slept for nine. Every group had the same access to food throughout the study.

While everyone’s energy level stayed the same, people who slept less were more likely to eat more in the early days of sleep deprivation. People sleeping less than four hours a night ate an extra 300 calories compared to when they first started and slept for nine hours. Each person ate approximately 13 percent more protein and 17 percent more fat.

“The visceral fat accumulation was only detected by CT scan and would otherwise have been missed, especially since the increase in weight was quite modest — only about a pound,” Dr. Covassin says. “Measures of weight alone would be falsely reassuring in terms of the health consequences of inadequate sleep. Also concerning are the potential effects of repeated periods of inadequate sleep in terms of progressive and cumulative increases in visceral fat over several years.”

While not directly tested in the study, the researchers suggest increased exercise and healthier food choices could improve the health of people who regularly experience sleep deprivation or changes in their sleep schedule, such as shift workers.

The study appears in the Journal of the American College of Cardiology.