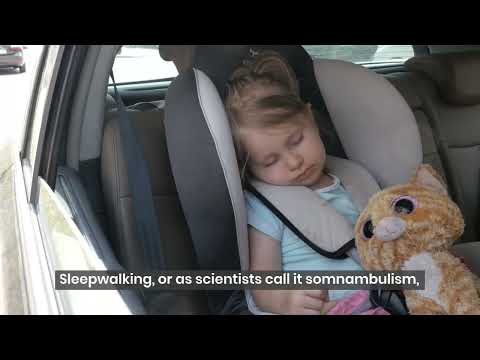 MONTREAL, Quebec — Sleepwalking, or as scientists call it somnambulism, is a phenomenon that has intrigued people for years. Neurologists have examined the human brain in search of an explanation, but have not found a solid answer. Now, a recent study reveals sleepwalking may have a lot to do with a person’s “fight or flight” response. Specifically, those who display lower fight or flight reaction as they sleep — and more nervous system responses tied to relaxation — are more prone to go for a walk while unconscious.

Sleepwalking is a condition in which the person does not enter the rapid eye movement or REM sleep stage. In adults, it occurs in less than five percent of people. Scientists say sleepwalkers usually find it difficult to stay awake the day after an episode due to exhaustion from lack of sleep. Also, those who sleepwalk are often subject to even more episodes, as lack of sleep amplifies the severity and number of episodes. This makes it more difficult for those individuals to attain REM sleep, which is a crucial component overall health.

Aside from disrupting their normal sleep pattern, some people become harmful to themselves and others when sleepwalking – adding to the importance of finding a treatment. From a recent investigation led by a team of Montreal scientists in Canada, scientists may be a step closer to finding that treatment.

Do sleepwalkers react to ‘fight or flight’?

They included 14 sleepwalkers, all over the age of 18, in the research, along with 14 non-sleepwalking participants for the control group. All participants had to stay awake for 25 hours prior to the study. In one overnight session and throughout the restorative phase, the team monitored all participants via video camera and heart rhythm gauges.

“One challenge in studying large cohorts of sleepwalkers is the relatively low prevalence of the disorder in the adult population,” researchers say in a media release. “Fortunately, the Center for Advanced Research in Sleep Medicine, where this research was conducted, is a one-of-a-kind clinical and research facility in Canada affiliated with one of the country’s largest and highly specialized sleep disorders clinics that assesses over 1,000 patients a year. As a general rule, however, adult sleepwalkers are readily willing to take part in research studies aiming to better understand the underlying causes and possible treatments of the sleep disorder.”

There are two primary components of the autonomic nervous system, one of which controls the “fight or flight” reaction, and another which controls the “rest and digest” reaction. The sympathetic division is responsible for upregulating subconscious motor functions that usually occur during scary or intense situations.

For example, when something scares a person, this system stimulates the release of adrenaline which causes the pupils to dilate and the heart rate to accelerate, among other functions. The parasympathetic division, which is normally in control, downregulates subconscious motor functions usually to prepare the body for digestion, relaxation, or sleeping.

‘Rest and digest’ to blame for unconscious strolls?

Dr. Andrée-Ann Baril and Professor Antonio Zadra from Montreal University predicted the sympathetic nervous system to be the underlying factor controlling sleepwalkers since this system stimulates a sort of survival mode. However, results indicated the parasympathetic division was responsible.

“While the causes of sleepwalking remain unclear, we know that while asleep, sleepwalkers can experience an abnormal interplay between processes linked to arousal and to deep sleep, even outside of their episodes,” Zadra and Baril explain.

“In other words, sleepwalkers can present evidence of both wakefulness and deep sleep at the same time; a state out of which episodes of sleepwalking can arise. Our findings indicate that when compared to healthy adults, sleepwalkers’ autonomic nervous system favors their parasympathetic activity, or rest-and-digest response, during sleep. This paves a new and broader way to understand the biological processes implicated in sleepwalking.”

Sleepwalking participants showed a decrease in heart rate, which is related to the “rest and digest” system. Moreover, sleepwalkers appear to have a lower fight or flight reaction in their deep sleep, contrary to popular belief, which would have predicted a greater probability of recurring sleepwalking events.

Because other variables outside of the autonomic nervous system can affect heart rate, gauging heart rate alone could have given false results.

“While our results indicate the presence of an altered autonomic nervous system during sleepwalkers’ deep sleep, whether and how this atypical activity is involved in the occurrence of actual sleepwalking episodes remains to be determined,” Zadra and Baril conclude. “Since several pharmaceutical agents can be used to modulate autonomic effects, such treatment venues could be explored if our results are replicated and expanded upon.”

This findings appear in the journal Frontiers in Neurology.

Best Electric Guitars for Beginners: Top 5 Instruments Most Recommended By Experts53 mins ago