Sociology researchers from Baylor University and Campbell University say smartphones provide access to limitless information, which can lead people to mistakenly believe they are actively searching for a higher, ultimate meaning. In reality, however, their endless search is an endgame itself and users are simply feeding into a fruitless technology addiction.

The researchers say the complex relationship between meaning-seeking and limitless data-finding at people’s fingertips has ties to feelings of unhappiness, depression, suicidal ideation, and loneliness. A Baylor survey about information and communication technology (ICT) devices reveals that people who seek solace or attachment through their phones might in fact find the opposite. Study authors compared those answers with a “Meaning in Life Questionnaire” about respondents’ feelings of satisfaction or meaning derived from their devices.

“Human beings are seekers – we seek meaning in our relationships, our work, our faith, in all areas of social life,” says Christopher M. Pieper, Ph.D., senior lecturer of sociology at Baylor University, in a media release. “As researchers, we were interested in the role that smartphones – and the media they give us instant access to – might be playing in meaning-seeking.”

“Seeking itself becomes the only meaningful activity, which is the basis of anomie and addiction,” Pieper adds.

People who frequently demand instant access to information on their phones or who routinely seek answers through short-burst searches may soon find themselves in longer and longer searches. This process increases people’s physical and mental attachments to their smartphones and can ultimately exacerbate their addiction to such devices.

“Our research finds that meaning-seeking is associated with increased smartphone attachment – a feeling that you would panic if your phone stopped working,” says Justin J. Nelson, M.A., Ph.D., and assistant professor of sociology at Campbell University. “Social media use is also correlated with increased feelings of attachment.”

Ultimately, people who seek meaning or answers from their devices may be disappointed or let down, creating feelings of depression or loneliness. The study authors note that such feelings of attachment are highest for individuals who use social media less often.

“What is interesting is this association decreases for the heaviest of social media users,” Pieper concludes. “While we don’t know how this group uses social media, it might be that normalized use at the highest levels erases feelings of attachment for the individual – as we put it, it would be like saying one is attached to their eyes or lungs.”

The study is published in the journal Sociological Perspectives. 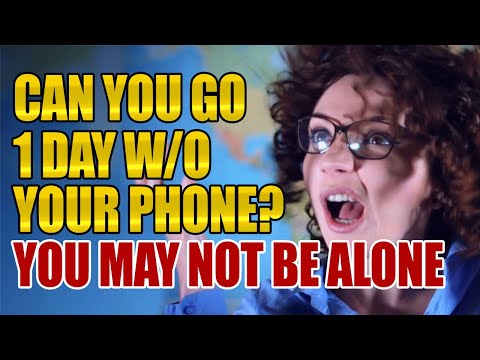