LAUSANNE, Switzerland — People who suffer from blindness may be able to enjoy the restoration of some degree of vision thanks to new retinal implants. The innovative, solar-powered implants could help bring a greater quality of life to those who suffer from vision impairment.

Globally, there are 32 million people with blindness, about 6% to 13% of whom have lost the retinal cells that are sensitive to light. Current treatment includes the implant of a retina capable of stimulating the cells with electrodes.

“However, current implants produce very poor results, and their wearers are still considered legally blind. In order to lead what is considered a ‘normal’ life, the implantee must recover a visual field of at least 40 degrees, but current implants achieve only 20 degrees,” says Diego Ghezzi, who holds the Medtronic Chair in Neuroengineering in the Swiss Federal Institute of Technology’s School of Engineering, in a statement.

Current models include electrodes covering the surface of the retina which stimulate the light-sensitive cells according to the amount and wavelength of light detected. The electrodes are connected to a pair of glasses which are responsible for capturing the light. The glasses contain a camera that is connected to a microcomputer. Light that enters the glasses is funneled to the camera which sends the images to the microcomputer, which then converts the images to electrical signals to be sent to the electrodes.

The person wearing the glasses must decipher the signals to determine what they are seeing. This process is made easier with an increased amount of light patterns. Additionally, more detailed patterns of light make it easier for the brain to interpret and recognize the image. This means that images that are not as detailed or that contain few light patterns are not as easily deciphered.

The new implant also involves the use of a camera and glasses, however, photovoltaic pixels take the place of wires. To make the visual field wider, the team decided to increase the surface area. This helped to enhance the quality of the image as well as the stimulation of more light-sensitive cells in the retina. 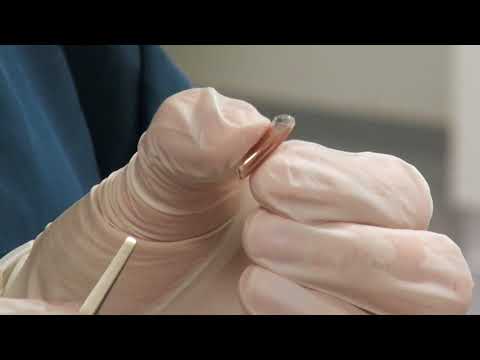 “This will expand the field of vision. Existing implants only stimulate cells at the center of the retina,” says Laura Ferlauto, a scientist at the LNE.

“It also means we can increase the number of photovoltaic pixels, which will sharpen the images,” adds Naïg Chenais, a Ph.D. student at the lab.

Previous implants were made smaller due to surgical limitations.  “The cut has to be as small as possible to avoid damaging the tissue,” sys Chenais. In order to bypass this, the team chose a flexible material capable of being folded during implantation. This allows surgeons to implant the larger model without making a larger incision.

The transparent polymer material is non-toxic and is widely used throughout the medical field. “Because the polymer is flexible, the implant can bend to the curvature of the eye and be in greater contact with the retinal ganglia,” added Marta Airaghi Leccardi, another Ph.D. student at the LNE.

The wireless implant was made possible by the use of photovoltaic pixels, which are powered by solar energy. They create the electrical current formerly produced by electrodes, however, they do not need an outside source of energy to do so. The camera magnifies the light to be sent to the photovoltaic pixels, rather than converting it into electrical signals.

“The pixels will only react to light signals that meet certain requirements in terms of intensity, duration, and wavelength. Natural light alone isn’t enough,” said Ferlauto. The pixels are smaller than the electrodes which means a single implant contains more pixels than electrodes in the previous models. This helps to further increase visual sharpness and field.

Initial tests proved successful as the implant was not toxic to the body and aided in significantly improving vision for the implantees. Researchers will now test the prototype in an in vivo trial during which they will determine the duration of the implant as well as the behavior of the pixels. “It will also be interesting to see how well humans adapt to this new way of seeing, which is unlike our natural vision,” concludes Ferlauto.

These findings are published in Nature Communications.