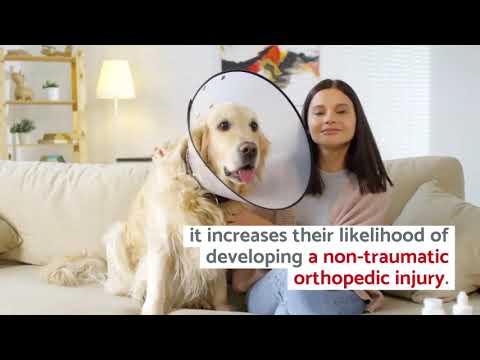 DENVER — Are you feeling queasy about taking your new dog to be “fixed”? While it’s generally considered the right thing to do as a pet owner, some people hesitate to spay or neuter their pet because, well, it doesn’t exactly sound like a pleasant experience for the pup. However, new research finds that dog owners, specifically large-breed dog owners, may also be saving their pets from weight issues and orthopedic issues by holding off on such procedures.

Spaying or neutering large-breed dogs at any age can increase their risk of obesity later on in life, according to researchers at the Morris Animal Foundation. Additionally, the authors say that if a large breed dog is spayed or neutered at a very young age, it increases their likelihood of developing a non-traumatic orthopedic injury.

“For years, we’ve been taught that spaying or neutering your dog is part of being a responsible pet owner, but there really are advantages and disadvantages to consider when making that decision,” explains lead author Dr. Missy Simpson, Morris Animal Foundation epidemiologist, in a statement. “Our study results give dog owners and veterinarians new information to consider when deciding on when to spay or neuter their dog, especially when considering the long-term health of their pet.”

Obesity among larger dogs is already a problem. Anywhere from one-third to one-half of all large-breed dogs are estimated to be overweight. Additionally, roughly 2% of the large-breed canine population deal with non-traumatic orthopedic injuries.

Researchers analyzed health data collected on over 3,000 golden retrievers over the course of six years. This study was conducted by asking owners and veterinarians to complete yearly online questionnaires about the health and lifestyles of their dogs. Biological samples were collected from the dogs, and each pup had a physical examination every year.

However, age at the time of surgery was shown to be a significant factor regarding non-traumatic orthopedic injury risk. Dr. Simpson found that dogs that were spayed or neutered before six months of age had a 300% greater risk of developing orthopedic problems.

While the data used by researchers was only made up of golden retrievers, the study’s authors are confident that their findings can be applied to other breeds, specifically larger dogs.

“Different owners have different concerns for their dogs and the decision to spay or neuter your dog is a very complex one,” says Dr. Janet Patterson-Kane, Morris Animal Foundation Chief Scientific Officer. “It’s a balance in managing the risks of neutering or not neutering for owners committed to their dog’s health.”

The study is published in the scientific journal PLOS One.

Best Super Bowl Commercials Of All-Time: Top 5 Most Memorable Ads, According To Experts34 mins ago

Live near a busy road? It could lead to a common hearing problem1 hour ago