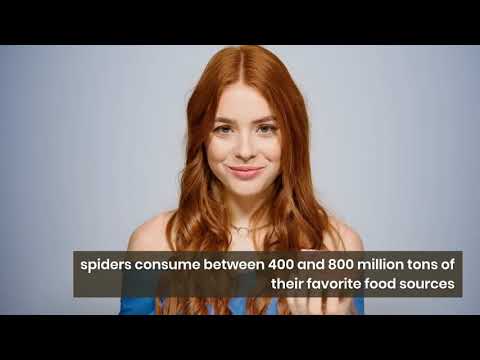 According to a new study, spiders may be “itsy bitsy” in size, but they have prodigious appetites.  Martin Nyffeler of the University of Basel, Switzerland decided to estimate just how much the arachnids eat annually compared to other species, including humans.

His findings were published in the April 2017 issue of Science of Nature.

The calculations Nyffeler used were fairly simple.  First, he estimated the total number of spiders worldwide, combined with estimates of spider numbers per square meter.  Next, he integrated data on the amount of food an average spider needs to survive.  He also looked at prey capture observations in the field to get a better sense of the mechanics of spider predation.

His findings, on their face, seem shocking. While humans consume roughly 400 million tons of meat and fish annually, spiders consume between 400 and 800 million tons of their favorite food sources including insects like flies and mosquitoes, little non-insect bugs called springtails, and even small vertebrates.

How can such tiny creatures out-eat enormous mammals?  The relative numbers of the two species has something to do with it.  There are roughly 7 billion humans on earth compared to 100 billion or more spiders, maybe more.  Britain alone has 750 million, one study found.  Worldwide there are 37,500 different species of spiders.  By comparison, there are only 9,000 species of birds and 4,000 species of mammals.  And spiders are even more predominant in parts of the world covered with forests and grasslands.

In other words, the spider’s strength in numbers gives the species an overall “size” advantage when it comes to food consumption.

And that’s a good thing.  Because spiders are responsible for eliminating pests that would otherwise destroy crops, including caterpillars and aphids.  One expert claims that without them, much of the world would be engulfed by famine.

“We hope that these estimates and their significant magnitude raise public awareness and increase the level of appreciation for the important global role of spiders in terrestrial food webs,” says Nyffeler in a news release.

Spiders have many other major upsides, especially for humans.  They rarely attack us, for example.  And amazingly, scientists and engineers have studied the design and strength of webs to produce super-strong artificial silk that may one day be used in parachutes and bullet proof vests.

In fact, we’re only at the very beginning of understanding the medical and scientific benefits that the eight-legged bugs can bring.

So the next time you see a spider crawling near you – and the likelihood is higher than you think – don’t squash the critter.  Pay your respects.  It may just be saving your life.