Shocking report reveals that while nearly 9 in 10 children’s drinks show images of fruit on the packaging, about two-thirds of the products don’t actually contain any juice in them.

HARTFORD, Conn. — Childhood obesity has become a major problem in the United States. Unfortunately, fruit drinks and flavored waters containing added sugars or low-calorie diet sweeteners continue to monopolize children’s drink sales. In 2018, these drinks accounted for 62% of the $2.2 billion in U.S. children’s drink sales, according to a new study. Even worse, researchers say brands are using deceptive tactics to fool consumers: 85% of these beverages showed images of fruit on the packaging, but only 35% actually contained any juice.

Despite the continued rise of the health food industry, the University of Connecticut study shows that healthier children’s drinks, such as 100% juice beverages, only made up 38% of 2018’s children’s drink sales. Perhaps most troubling of all, the companies behind these unhealthy drinks are sparing no expense on marketing; a total of $20.7 million dollars was spent on advertising children’s drinks with added sugars in 2018, with the targeted demographic being kids under the age of 12. 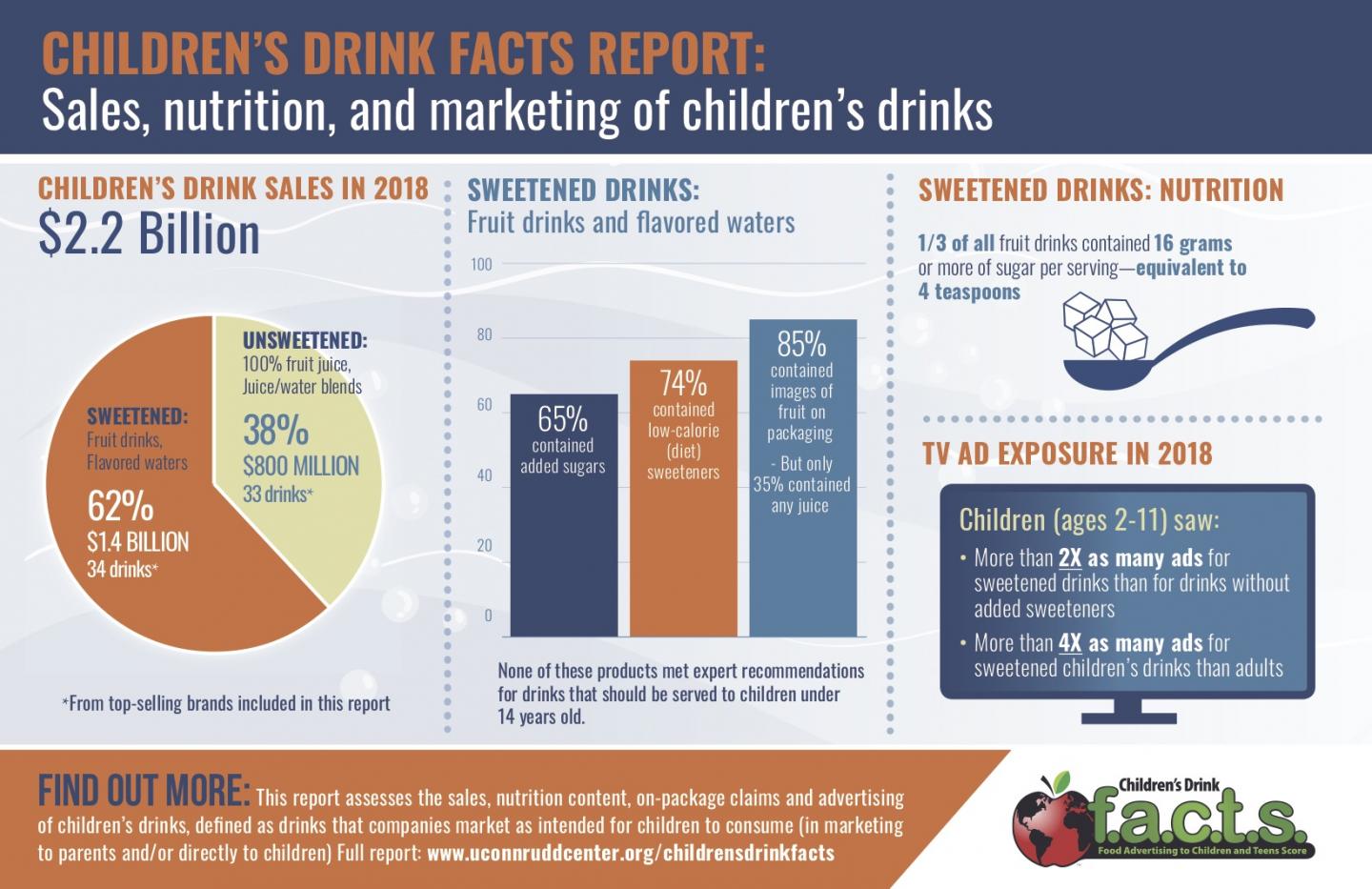 Sadly, the study’s authors say that many of these unhealthy, sugary drinks feature colorful packaging and broad nutritional claims designed to catch kids’ eyes on store shelves and mislead parents into assuming they hold some type of redeemable nutritional value. Additionally, these marketing tactics make it harder for parents and children to identify the children’s drinks that really are healthier.

“Beverage companies have said they want to be part of the solution to childhood obesity, but they continue to market sugar-sweetened children’s drinks directly to young children on TV and through packages designed to get their attention in the store,” says lead study author Dr. Jennifer L. Harris in a release. “Parents may be surprised to know that pediatricians, dentists, and other nutrition experts recommend against serving any of these drinks to children.”

One of the most pronounced problems researchers identified was just how similar the packaging of unhealthy sweetened drinks were to the packaging of healthier beverages. For example, most sugar-sweetened children’s drinks contain only 5% real juice, but 80% of these beverages feature packaging containing fruits. Furthermore, 60% of these unhealthy drinks claim to include “less” or “low” sugar or “no high fructose corn syrup.” Meanwhile, children’s drinks that actually are healthy and contain no sugary additives largely feature the same packaging sizes, fruit imagery, flavor names, and nutritional claims as sweetened beverages.

“You shouldn’t have to be a nutritionist to figure out whether or not a product is healthy for your child,” says study author Dr. Maria Romo-Palafox. “The fronts of the packages make children’s drinks look healthy, but there’s no way to know which ones have added sugars or low-calorie sweeteners reading the front. You have to read the nutrition facts panel on the back and you have to know the names of low-calorie sweeteners, such as acesulfame potassium and sucralose, to realize they are in the product,”

For reference, according to health and nutrition experts, children under the age of five shouldn’t drink any beverages that contain added sugars or low-calorie sweeteners, and should only drink limited amounts of 100% juice.

On a positive note, the study did find some improvements; more companies than ever before are starting to produce and sell unsweetened juice-water blends, which are generally healthier than sweetened drinks. Also, besides one sugary children’s drink brand, licensed cartoon characters only appeared on branding for unsweetened, 100% juice beverages — a significant improvement over just a few years ago when numerous children’s characters were being used to advertise various unhealthy drinks. Television advertising is down as well, with Kraft Heinz being the only company to advertise sugary drinks directly during children’s programming. These ad campaigns consisted mostly of the well known brands Kool Aid and Capri Sun.

All that being said, children between the ages of two to 11 still saw more than twice as many ads on TV for these drinks than for unsweetened beverages.

Among the study’s other findings:

The research team have a number of recommendations on how to address these serious public health issues moving forward. Most importantly, the producers of these beverages must be more transparent and clearly indicate when a beverage contains added sugars, etc. They also recommend that the Children’s Food and Beverage Advertising Initiative (CFBAI) institute stricter nutrition standards for children’s drinks; drinks with added sugars should not be allowed to be advertised to children.

The U.S. Food and Drug Administration could also ban the use of fruit or vegetable images on beverages that don’t actually contain any juice, or a minuscule amount. State and local taxes on sugary drinks should also be extended to children’s beverages. In theory this would raise prices and discourage parents from buying such drinks for their children.

The study was funded by the Robert Wood Johnson Foundation.