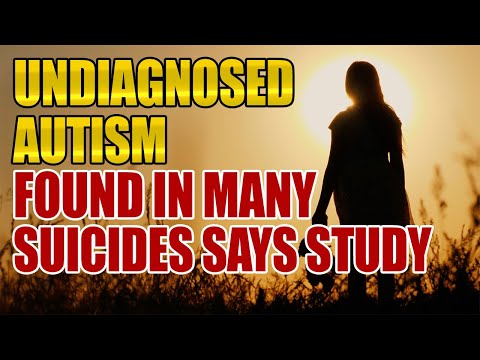 NOTTINGHAM, United Kingdom — Troubling research by a team from Nottingham University finds a high rate of people who died by suicide may have had an undiagnosed case of autism. Study authors urge the importance of developing more efficient ways to diagnose all forms of autism as early as possible. They also recommend the development of tailored suicide-prevention services for autistic individuals.

This is the first ever research project to investigate the relationship between suicide in the United Kingdom and autism. Researchers analyzed a total of 372 coroner’s reports examining people who died by suicide. The team also conducted interviews with family members of the deceased.

Autism may be much more common than estimates show

The first half of the analysis revealed that 10 percent of those who passed away by suicide showed at least some evidence of elevated autistic traits, suggesting undiagnosed autism. This would be 11 times higher than the U.K.’s official autism rate. After completing the second portion of the study (family interviews), researchers found evidence of elevated autistic traits among even more individuals dying by suicide (41%).

“Many adults in the UK find it very difficult to obtain an autism diagnosis and appropriate support post-diagnosis. Our study shows that undiagnosed autistic people could be at increased risk of dying by suicide. It is urgent that access to an autism diagnosis and appropriate support post diagnosis is improved. This is the top autism community priority for suicide prevention, and needs to be addressed immediately by commissioners of services and policy makers,” says lead researcher Dr. Sarah Cassidy in a university release.

Initially, researchers went over the coroner’s records for each death by suicide and looked out for signs of autism. Next, an independent researcher assessed indicators of autism to further validate the observations. From there, the team interviewed 29 families in order to get a better sense of any undiagnosed autism cases.

Previous studies conducted by these same scientists found that up to 66 percent of autistic adults have experienced suicidal thoughts, with 35 percent actually attempting suicide. Meanwhile, despite estimates showing only one percent of the U.K. population having a formal diagnosis of autism, 15 percent of all U.K. adults who attempt suicide are autistic.

“Even a single suicide is a terrible tragedy for the person and a traumatic loss for their families and friends. Suicide rates are unacceptably high in autistic people and suicide prevention has to be the number one goal to reduce the worrying increased mortality in autistic people. Autistic people on average die 20 years earlier than non-autistic people, and two big causes of this are suicide and epilepsy. We published the preliminary data on elevated suicide rates back in 2014 as a wake-up call to governments, and yet nothing has been done,” adds Professor Simon Baron-Cohen from the Autism Research Centre at the University of Cambridge.

The findings are published in The British Journal of Psychiatry.