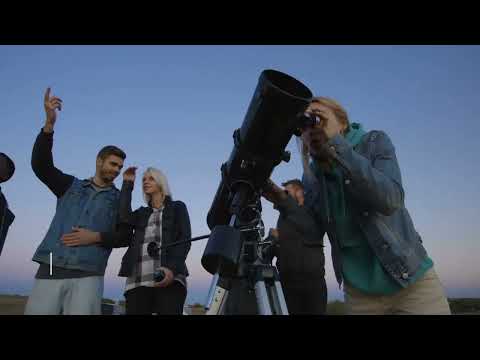 STRASBOURG, France — Astronomers have detected two supermassive black holes spiraling toward a cataclysmic collision. As one of the closest pairs discovered to date, they will eventually merge into one colossal cosmic abyss. The event will send out gravitational waves — ripples in space and time predicted in Albert Einstein’s general theory of relativity.

The couple lies 89 million light-years away in the constellation of Aquarius. They are just 1,600 light-years apart. “It is the first time we find two supermassive black holes that are this close to each other, less than half the separation of the previous record holder,” says lead author Dr. Karina Voggel, an astronomer at the Strasbourg Observatory in France, in a statement.

“The small separation and velocity of the two black holes indicate that they will merge into one monster black hole, probably within the next 250 million years,” adds co-author Holger Baumgardt, a professor at the University of Queensland, Australia.

The bigger black hole was found to have a mass almost 154 million times that of the Sun. It is located right at the core of its galaxy, known as NGC 7727. Its companion is 6.3 million solar masses. Each is at the center of dense groups of bright stars captured by the European Space Observatory’s (ESO) Very Large Telescope (VLT) in Chile.

The international team calculated the sizes of the black holes from the gravitational pull on the stars around them. This was made possible by the proximity to Earth. A scanner, called Multi-Unit Spectroscopic Explorer (MUSE), mounted on the telescope and Hubble data confirmed the supermassive black holes.

“Our finding implies that there might be many more of these relics of galaxy mergers out there and they may contain many hidden massive black holes that still wait to be found. It could increase the total number of supermassive black holes known in the local Universe by 30 percent,” says Dr. Voggel.

Black holes are the strangest objects in the universe: regions of space where matter has collapsed in on itself. Their gravitational pull is so great nothing can escape — not even light. The search for similarly hidden supermassive black hole pairs is set to make a great leap forward with ESO’s Extremely Large Telescope (ELT), which is being built in the Atacama Desert in Chile, just 12 miles from the VLT, and is due to be in operation before the end of the decade.

“This detection of a supermassive black hole pair is just the beginning. With the HARMONI instrument on the ELT, we will be able to make detections like this considerably further than currently possible. ESO’s ELT will be integral to understanding these objects,” says study co-author Steffen Mieske, an astronomer at ESO in Chile and Head of ESO Paranal Science Operations.

The study is published in the journal Astronomy & Astrophysics.