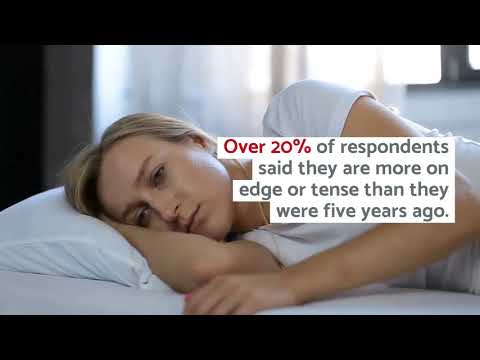 GUERNSEY — Technology has simplified our lives in ways that would have been unimaginable just a few decades ago. Never before has information been so readily available at our fingertips, but at the same time that also means our responsibilities are always just a buzz away as well. These modern-life demands and pressures, a new survey finds, are making more people anxious than ever before.

The researchers conducted a detailed survey, commissioned by wellness brand Healthspan, to find the leading causes of anxiety in average British citizens. They found that pressure at work, at home, and in their social lives has caused 40% of those surveyed to say they believe they now suffer from one type of anxiety or another.

Over 20% of respondents said they are more on edge or tense than they were five years ago. Their primary worry: health concerns. Others said their anxiety is rooted in taking time off from work, socializing, their finances, or their career. Of those who reported suffering from anxiety, 60% admitted to seeking out medical advice from a doctor.

Another 60% of respondents said they exercise regularly to combat their anxiety, while 59% reported using medication and supplements like CBD oil to help cope with their stress.

“Our lives are becoming busier and can feel overwhelming – we’re constantly striving for more and better,” explains Dr. Jen Bateman, a clinical psychologist who works for Healthspan, in a statement. “Worldwide events are being streamed into the phone in the palm of our hands in our highly-connected digital worlds, and it’s challenging to ‘switch-off’, which our brains need to rest and stay calm. The constant stream of demands and data is overpowering for many, especially for those with a vulnerability to developing anxiety.”

In all, 62% of respondents said they believe their life has become increasingly anxiety-inducing. The average person rated their anxiety levels at nearly three out of five, with five considered “very severe.”

The survey also indicates that a great number of people are suffering with their anxiety quietly; with only 28% saying they are comfortable discussing how they feel with friends or co-workers. Silent suffering isn’t the only consequence of all this anxiety, either, with almost one in 10 admitting their anxiety led to the loss of a job and 19% reporting they quit their job due to anxiety.

This spike in anxiety is seeping into almost every facet of sufferers’ lives: nearly 1 in 5 (19%) admit anxiety has caused a relationship to end; 27% have lost friends; 36% report an increase in their weight; and 43% say they avoid going out and socializing entirely.