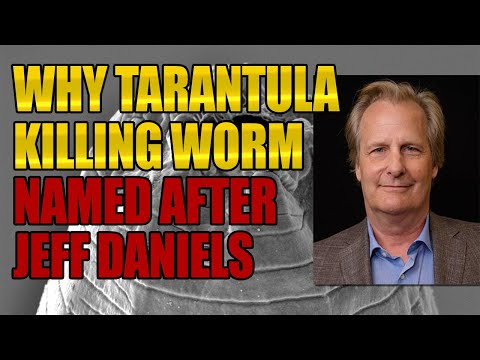 RIVERSIDE, Calif. — Scientists have discovered a new species of worm that can infect and kill tarantulas. To honor their rare find, a team at the University of California-Riverside have named the fatal parasite after famous “Arachnophobia” spider-killer Jeff Daniels. Meet the Tarantobelus jeffdanielsi!

Although there are more than 25,000 species of this kind of worm — called nematodes — this is only the second time researchers have found a variety that can infect a tarantula. That’s why study authors decided to name it after the star of the 1990 film.

“His character in the film is a spider killer, which is exactly what these nematodes are,” explains UC Riverside parasitologist and lead researcher Adler Dillman in a university release.

“When I first heard a new species of nematode had been named after me, I thought, ‘Why? Is there a resemblance?’” Daniels says. “Honestly, I was honored by their homage to me and Arachnophobia. Made me smile. And of course, in Hollywood, you haven’t really made it until you’ve been recognized by those in the field of parasitology.”

The worm paralyzes spiders and makes them starve to death

In 2019, a tarantula breeder contacted Dillman’s team after spotting some strange behavior among their spiders. Along with an infection around the mouth area, the tarantulas started walking on their tiptoes and did not eat. The appendages that control the spiders’ mouths and fangs also stopped working.

“It may take months because tarantulas don’t have to eat particularly often. However, if they get this infection, they will die of starvation,” Dillman reports.

Study authors found that the nematodes in a jeffdanielsi infection also reproduce asexually, meaning they are hermaphrodites that produce their own sperm and eggs. They create up to 160 babies during their lifespan, which lasts only 11 days. However, it’s still unclear how long they live once they infect a spider.

These worms also only infect the mouth area and scientists did not find any in the stomach. Additionally, the infection does not appear to damage a spider’s body, it just paralyzes the fangs they need to eat.

“It isn’t clear that the nematodes feed on the spider itself. It’s possible that they feed on bacteria that live on the tarantulas,” Dillman explain.

When the team grew these worms in a lab setting, they fed on e. coli, leading researchers to believe that the parasites are bacteria-eaters. Dillman’s team is now planning to study why and how Tarantobelus jeffdanielsi paralyzes the pedipalps — the organs which control a spider’s fangs.

“Nematodes have been around for hundreds of millions of years. They’ve evolved to infect every kind of host on the planet including humans,” the researcher concludes. “Any animal you know of on planet Earth, there’s a nematode that can infect it.”

The study is published in the Journal of Parasitology.