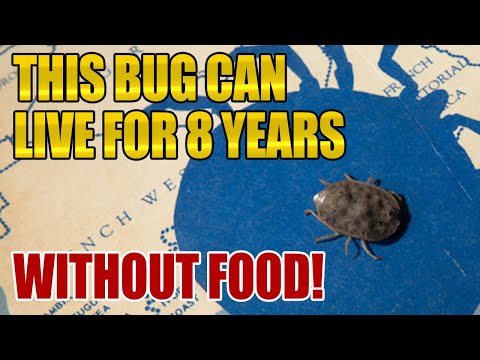 BINGHAMTON, N.Y. — A tick species from Africa is changing what scientists know about these blood-sucking parasites. A new study reveals the East African species can actually survive for nearly a decade without feeding and has a lifespan of 27 years.

The surprising findings come from Julian Shepherd, an associate professor of biological sciences at Binghamton University, who received a collection of Argas brumpti ticks back in 1976. Despite running out of food sources for the critters a few years later, Shepherd discovered the ticks could survive and even reproduce asexually after the males died out! In fact, the offspring of the original ticks are still alive and reproducing today — over 45 years later!

The Argas brumpti is not the same as the common tick species you’ll see during the summer months across America. Those varieties have a hard plate in their skin, while the Argas brumpti has a soft and leathery skin. The African variety also bloats less, eats faster, and feeds on blood more frequently than other ticks.

“I am always enthralled by the adaptations of organisms to their environment – in this case, a dry environment with virtually no access to water for long periods of time and a lifestyle that must wait for very long intervals of no food between encounters with host animals,” Shepherd says in a university release.

Ticks can live for 8 years without blood

So, eight years after removing the ticks’ food source, the researcher reintroduced the parasites to blood. This led to yet another discovery and surprising trait of the Argas brumpti. It turns out at least one of the female ticks was able to lay eggs and reproduce asexually — meaning without a partner. The study author says the creature was able to store sperm over that long period without males around — a new record for any tick species.

That batch of eggs contained both male and female ticks, which are still alive in 2022! The study also found that the Argas brumpti is also able to conserve water and energy over long periods without vital resources.

“Research on how organisms master such challenges can inform understanding of how other organisms, including us, might manage similar challenges,” Shepherd explains.

Shepherd is now saying goodbye to his collection. These long-lived ticks are heading to a team in South Africa for further study.

“I have more ideas for work with ticks, but I am now concentrating on a separate line of research working with moths on the physiology of sperm,” Shepherd concludes. “I was very glad that the South African researchers could use the ticks.”

Shepherd’s findings are published in the Journal of Medical Entomology.