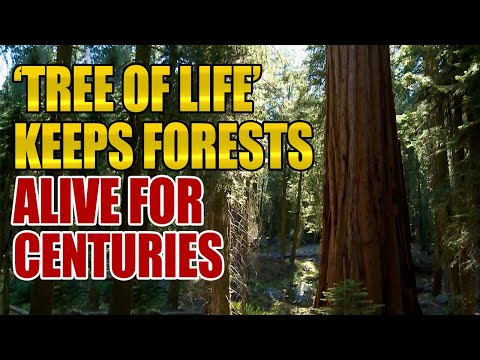 LISLE, Ill. — A rare breed of ancient trees appears to be the key to life for forests all over the world. Researchers at The Morton Arboretum say in many forests which date back centuries, there are a small number of trees which provide genetic and evolutionary benefits to the rest of the environment. Moreover, this “tree of life” is usually 10 to 20 times older than the average plant species dwelling in that forest!

Study authors say the ancient trees radically change the genetic diversity and health of the surrounding trees which arrive later on. All of this keeps forests from dying out, while thriving for thousands of years.

“We examined the demographic patterns that emerge from old-growth forests over thousands of years, and a very small proportion of trees emerge as life-history ‘lottery winners’ that reach far higher ages that bridge environmental cycles that span centuries,” says Dr. Chuck Cannon, director of The Morton Arboretum’s Center for Tree Science, in a media release.

“In our models, these rare, ancient trees prove to be vital to a forest’s long-term adaptive capacity, substantially broadening the temporal span of the population’s overall genetic diversity.”

These old trees don’t die out like your normal houseplant

Study authors found that these ancient trees don’t follow a natural (and predictable) life cycle like other plants, trees, and even humans. They also only make up fewer than one percent of the trees in the environment.

Despite their extreme age, the study finds they’ve survived countless environmental changes. This has allowed the trees to pass on their genetic resilience to the rest of the forest-dwelling organisms which sprout up around them. Additionally, researchers say ancient trees are able to cut off a large amount of carbon in comparison to the typical old tree in the woods.

While this breed of ancient tree has survived all sorts of environmental shifts throughout time, the study reveals deforestation threatens to clear out these life-giving landmarks. The team found evidence that the overall mortality rate of trees is increasing as humans spread out into previously uninhabited green spaces.

Moreover, the team notes that once these trees are gone, they’re gone. Their environmental models show that it’s becoming increasingly hard for trees to reach the impressive ages of existing ancient trees. Simply put, there may be no way to replace an ancient tree that takes care of a forest once they die.

“As the climate changes, it is likely that mortality rates in trees will increase, and it will become increasingly difficult for ancient trees to emerge in forests,” Cannon says. “Once you cut down old and ancient trees, we lose the genetic and physiological legacy that they contain forever, as well as the unique habitat for nature conservation.”

“This study recalls the urgent need for a global strategy to conserve biodiversity, not only by preserving intact forests, but in particular the small remnant of a few ancient trees that have survived in managed forest landscapes,” study author Gianluca Piovesan concludes.

The findings are published in the journal Nature Plants.