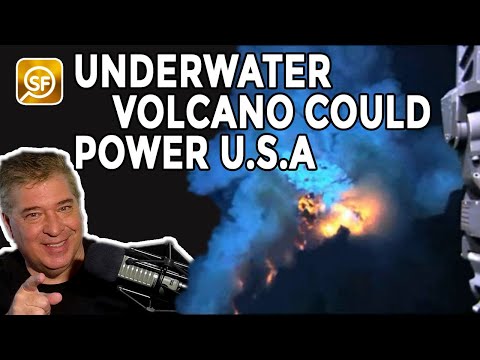 LEEDS, England — When we think of volcanoes, typically an image of those fearsome, fiery mountains spewing lava and ash come to mind for most of us. But scientists are calling attention to volcanic activity occurring deep within our planet’s waterways. According to a new study, volcanic eruptions below our seas are capable of releasing massive amounts of energy — enough to supply all of the U.S. with power!

Deep-sea volcanic eruptions were once believed to be boring in comparison to those on land. While land-based volcanoes frequently erupt spectacularly, spreading volcanic ash throughout the surroundings, oceanic eruptions were considered to exclusively generate lava streams that moved very slowly.

However, data collected by self-driving cars in the depths of the North East Pacific present fascinating new findings. They reveal a connection between the way in which ash is scattered during underwater eruptions, and the formation of dynamic columns of hot water referred to as megaplumes, ascending from the bottom of the ocean.

University of Leeds researchers say these megaplumes, which include water abundant in chemicals, behave similarly to the air plumes observed from volcanoes on land, ascending and then moving out, as they distribute volcanic ash. Megaplumes are massive, with water quantities comparable to 40 million Olympic-sized swimming pools. They’ve been discovered over several underwater volcanoes, however, their source is unclear. The findings of this recent study reveal that they develop quickly during lava eruptions.

Dr. David Ferguson of the School of Earth and Environment at Leeds, along with Dr. Sam Pegler of the School of Mathematics, both worked to form a mathematical system that models the flow of ash from underwater eruptions. This model demonstrates the dispersion of ash several kilometers away from the volcano. They reconstructed the mechanics of a previous underwater eruption using the ash pattern left behind. This reveals that the amount of energy generated and required to transport ash to the reported distances is enormous – equal to the electricity consumed by the entire United States.

“The majority of Earth’s volcanic activity occurs underwater, mostly at depths of several kilometers in the deep ocean but, in contrast to terrestrial volcanoes, even detecting that an eruption has occurred on the seafloor is extremely challenging. Consequently, there remains much for scientists to learn about submarine volcanism and its effects on the marine environment,” explains Dr. Ferguson in a statement.

Megaplumes develop as a result of underwater eruptions, however, the discharge of energy occurs so quickly that it must be provided by something other than just the erupted molten lava.  Instead, the study found that undersea volcanic eruptions cause stores of hot fluids inside the crust of the earth to rapidly deplete. This heated fluid is forced higher by the magma as it pushes its way to the seafloor.

“Our work provides evidence that megaplumes are directly linked to the eruption of lava and are responsible for transporting volcanic ash in the deep ocean. It also shows that plumes must have formed in a matter of hours, creating an immense rate of energy release,” notes Dr. Pegler.

“Observing a submarine eruption in person remains extremely difficult but the development of instruments based on the seafloor means data can be streamed live as the activity occurs. Efforts like these, in concert with continued mapping and sampling of the ocean floor, means the volcanic character of our oceans is slowly being revealed,” adds Dr. Ferguson.

This study was published in the journal Nature Communications.

Brain ‘turns off’ when relying on GPS behind the wheel, research shows12 mins ago

Best Women’s Hairstyles In 2023: Top 5 Trending Cuts Most Recommended By Stylists 59 mins ago