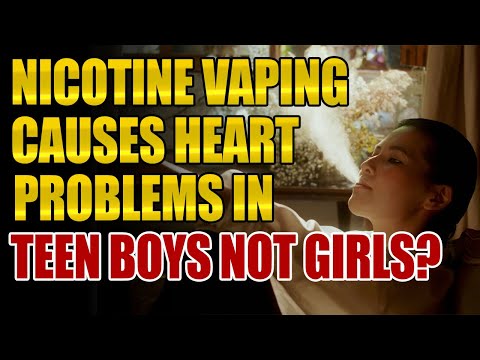 COLUMBUS, Ohio — Scientists find vapes containing nicotine might weaken the heart of teenage boys — but not girls. A new animal study suggests women likely avoid the most harmful effects of vaping because they possess higher levels of an enzyme that breaks down nicotine.

Vaping has become increasingly popular in recent years, with many smokers switching to the alleged healthier alternative. Minors under 18 can also purchase nicotine-free vape pens. However, because vaping is relatively new, people are concerned about the amount of nicotine in most e-cigarette brands. Nicotine improves mood and decreases stress, but it also activates brain areas involved in addiction and alters adolescent brain development.

“We don’t know the long-term effects of vaping because it’s only been around since the early 2000s. We haven’t had the time required to see what happens, especially with adolescents. To our knowledge, this is the first study to evaluate cardiac function in adolescent mice exposed to e-cigarette aerosol,” Loren Wold, the study’s senior author and associate dean for research operations and compliance in the Ohio State College of Medicine explains in a media release. “An animal study like this is important because it’s not possible to enroll children in a study like this. These types of studies give us an idea of the dangers of vaping so we can develop therapies as well as inform parents and public policymakers on the risks of vaping.”

Adolescent female mice have a protective enzyme against nicotine

The team gave mice an e-cigarette mixture containing nicotine, starting at an equivalent of what people between the ages of 12 and 30 would take. Male mice experienced heart problems from inhaling the mixture. Interestingly, female mice experienced no heart issues.

Further analysis showed females had higher levels of an enzyme responsible for breaking down nicotine called CYPA25 (CYP2A6 in humans).

“The results were surprising. We were shocked at the amount of protection afforded to females,” Dr. Wold says. “The theory is that since the enzyme breaks down nicotine so much faster, the nicotine isn’t in the circulation as long and that may be why females exhibit protection from vaping.”

The researchers hope to expand on their findings by looking into when adolescents develop heart problems after vaping. They also want to confirm whether the CYP2A6 enzyme helps protect women from heart problems brought on by vaping.

The study is available to read in the American Heart Association’s journal Circulation.