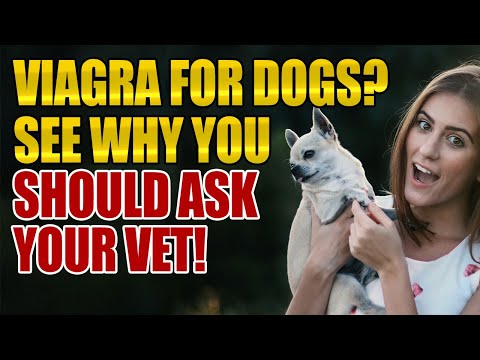 PULLMAN, Wash. — Viagra could become a “life changing and life saving” drug — for your dog. Researchers from Washington State University have found that the medication in the famous blue pill for erectile dysfunction can also help dogs who develop a rare eating disorder called megaesophagus.

Megaesophagus is a condition which affects the esophagus of many dog breeds. The organ enlarges and loses its ability to move food to the stomach. This leads to food bottling up in the lower esophagus, causing dogs to regurgitate food often or inhale (aspirate) the food into their lungs. In severe cases, this disorder causes aspiration pneumonia and generally dire outcomes for man’s best friend.

“The literature tells us that many dogs with the disease die from aspiration pneumonia or are humanely euthanized due to poor quality of life within eight months of diagnosis,” says study leader and veterinarian Dr. Jillian Haines in a university release.

How can Viagra help?

In this study, researchers tested the effectiveness of liquid sildenafil, the generic version of Viagra. After treating 10 dogs with megaesophagus, results show the drug relaxed the smooth muscle of the lower esophagus. This allowed the organ to open up for brief periods of time to let food pass to the stomach.

Aside from rare instances of gastrointestinal irritation, there were no harmful side-effects of using sildenafil at the doses used in the study. Researchers note doctors already use the drug as a treatment for high blood pressure in both dogs and humans.

“If you look at the literature, there are no drugs we can use to manage megaesophagus. Sildenafil is the first to target these mechanisms and reduce regurgitation, which is big because that’s what ultimately kills these dogs,” Haines explains. “It opens the lower esophageal sphincter for 20 minutes to an hour, which works really well for dogs because we only want that to open when they are eating.”

Study authors split the 10 dogs into two groups during the experiment, one receiving sildenafil for two weeks and one taking a placebo. The dogs then went one week without taking either medication. Finally, researchers switched these groups, so every dog in the trial could try sildenafil for the same amount of time.

During the study, each dog’s owner recorded each time their pet threw up. The WSU team did not tell the owners which medication their dog received to avoid any bias in their observations. Results show nine out of 10 dogs threw up less during the two weeks they received liquid sildenafil.

“In many cases, the owners were able to figure out which drug was sildenafil because it was working,” Haines adds.

The team also monitored how each dog handled liquid and blended wet food as it traveled down the esophagus using videofluoroscopy. Unfortunately, the 30-minute moving X-ray did not see a significant difference between a dog’s swallowing ability while taking sildenafil or a placebo.

On a positive note, the drug also improved each dog’s weight, with the canines gaining more than two pounds by the end of the study.

“Moderately affected dogs that were regurgitating frequently but not excessively seemed to see the most dramatic results,” Haines continues. “I actually prescribed sildenafil to several of those patients after the study, and they are still using it today.”

‘Sildenafil will be life changing and life saving’

Researchers note that sildenafil did not work as well for dogs with severe cases of megaesophagus. The study found, in those cases, it was harder to get sildenafil into the animal’s stomach so the body could absorb it.

According to VCA Animal Hospitals, dogs are more likely to develop megaesophagus than cats. It’s also a hereditary condition in Wire Haired Fox Terriers and Miniature Schnauzers. Other breeds which are more likely to have this problem include German Shepherds, Great Danes, Irish Setters, Greyhounds, and Labrador Retrievers.

“A lot of veterinarians are reaching out and asking about this drug,” Haines says. “I think sildenafil will be life changing and life saving for a lot of dogs. This research helps support its use and hopefully will encourage more people to use it.”

The study is published in the American Journal of Veterinary Research.