ISRAEL — Spectacular time-lapse images shot by an Israeli astrophotographer offer a fantastic look at flames flickering along the surface of the sun.

“I capture the sun because it is the most interesting and fascinating object that is near enough to explore from Earth. The sun, which is a star like all other stars in the universe, is constantly changing, and we as humans living out our lives don’t even notice it. Most of the time we just think of it as a bright light in the sky,” Dayag explains in an interview per South West News Service. “A few seconds of watching those videos and your entire view of it, changes.” 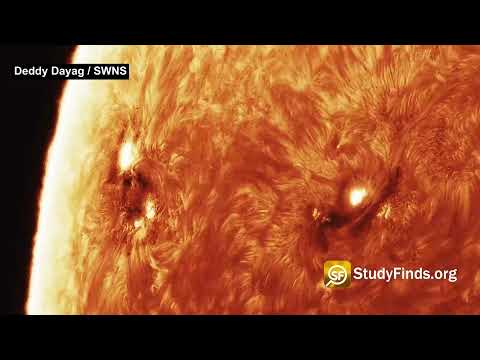 Dayag says even as a seasoned astrophotographer, he still couldn’t believe the beauty that his telescopes captured.

“When I reviewed the footage for the first time I was blown away! Literally shouted with excitement. And now, after almost two years of imaging the sun, I can still say that I get excited every-time I aim my telescope up there, because each time you don’t really know what to expect, each time is a surprise,” he says.

As for what Dayag wants viewers of his latest video to take away from it?

“I hope people will watch those videos and understand how small we are compared to our star. Our sun (named Sol) holds 99.8% of the entire solar systems mass,” he says. “We are a grain of dust.”

Dayag’s work has been featured on The Weather Channel and Astronomy Magazine.

See, I’m sick! 38% go to work ill just to prove it to their co-workers3 mins ago

Best Vodka For 2023: Top 5 Bottles Most Recommended By Expert Reviews11 mins ago

Best Sleeping Bags In 2023: Top 5 Camping Staples Most Recommended By Experts35 mins ago

Want to stop drinking alcohol? All you may need is a greater sense of purpose56 mins ago

Some antidepressants do nothing at all for patients dealing with chronic pain, study reveals4 hours ago