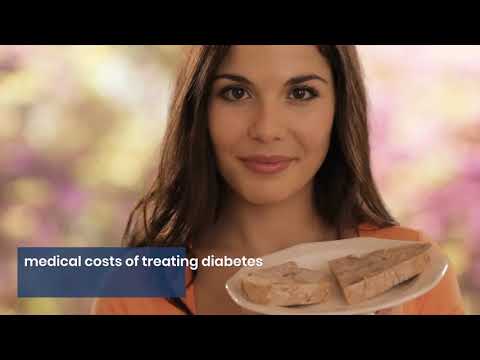 JOENSUU, Finland — Type 2 diabetes is a condition that around one in 10 Americans deal with on a daily basis. When you factor in the costs of changing diets and lifestyles, doctor visits, and drugs for managing blood sugar, diabetes is not just a health burden — but a financial burden as well. Now, researchers in Finland say eating more whole grains significantly reduces the risk of developing type 2 diabetes.

Moreover, their review finds adding more whole grains to the public’s diet will substantially cut down the economic costs that come with treating diabetes. Study authors say the target should be three to six servings of whole grains each day to reduce the risk of developing diabetes. However, even one serving can help keep blood sugar levels in check.

“Our study shows that already one serving of full grains as part of the daily diet reduces the incidence of type 2 diabetes at the population level and, consequently, the direct diabetes-related costs, when compared to people who do not eat whole grain foods on a daily basis. Over the next ten years, society’s potential to achieve cost savings would be from 300 million (-3.3%) to almost one billion (-12.2%) euros in current value, depending on the presumed proportion of whole grain foods in the daily diet. On the level of individuals, this means more healthier years,” says Professor Janne Martikainen from the University of Eastern Finland in a release.

For comparison, Finland has a population of just 5.5. million people. The U.S. has a population of the roughly 330 million, with around 34 million dealing with diabetes, according to the CDC. The cost savings of preventing type 2 diabetes would be immeasurable.

Proper nutrition can save you money

Globally, diabetes is one of the fastest-growing chronic illnesses. Previous studies estimate that up to half a billion people worldwide have diabetes, including many who don’t even know they have the condition.

Although proper diet can play a major role in staving off insulin resistance, study authors find few people, both in Finland and worldwide, get the recommended amounts of daily nutrients that doctors suggest.

“According to nutrition recommendations, at least 3–6 servings of whole grain foods should be eaten daily, depending on an individual’s energy requirement. One third of Finns do not eat even one dose of whole grains on a daily basis, and two thirds have a too low fiber intake,” says research manager Jaana Lindström from the Finnish Institute for Health and Welfare.

The team analyzed national follow-up studies to see the health and economic effects of eating more whole grains. This data allowed researchers to see the link between diet and the development of diabetes later on.

Want to stop drinking alcohol? All you may need is a greater sense of purpose9 mins ago