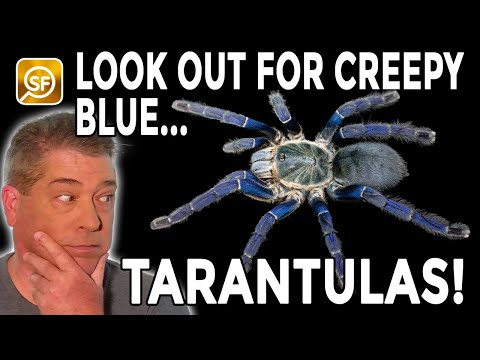 SINGAPORE — Forget red or pink, it turns out blue is the color of love. Well, at least for tarantulas. Scientists have long been puzzled as to why tarantulas, a grouping of nocturnal spiders always considered color-blind, often sport vibrant green or blue colors on their bodies. Now, a new study unlocks a multitude of answers.

Researchers from Yale-NUS College and Carnegie Mellon University reveal compelling evidence that tarantulas aren’t actually as colorblind as previously thought. Moreover, researchers believe the creepy crawlers use their distinct blue markings to attract and communicate with potential mates. Green coloring, on the other hands, serves as a useful camouflage aid.

To come to these conclusions the research team analyzed a group of opsins found within tarantulas. Opsins are light-sensitive proteins commonly found in animal eyes. Up until now, scientists had assumed that tarantulas, a primarily nocturnally-active variety of spider, didn’t have opsins in their eyes. Surprisingly, however, the authors found that tarantulas have the same amount of opsins as can be found within the Peacock spider, a day-active spider with color-vision.

This discovery suggests tarantulas are more than capable of seeing their own blue and green markings.

Tarantulas have always been colorful

Thanks to a complex process known as comparative phylogenetic analyses, researchers were able to reconstruct and put together the appearance of 110 million-year-old tarantula ancestors. Sure enough, even back then tarantulas were quite blue. Moreover, this process also helped determine that the blue coloring doesn’t seem to linked to any defense mechanisms or survival/hunting tactics.

So, if tarantulas didn’t evolve their blue markings to help with survival or hunting, researchers theorize the vibrant color must be associated with mating. Meanwhile, green markings only took root in tree-dwelling tarantula species, essentially confirming it serves as a camouflage aid.

“While the precise function of blueness remains unclear, our results suggest that tarantulas may be able to see these blue displays, so mate choice is a likely potential explanation. We have set an impetus for future projects to include a behavioral element to fully explore these hypotheses, and it is very exciting to consider how further studies will build upon our results,” comments study leader Dr. Saoirse Foley from CMU in a release.

“Our finding that blueness was lost multiple times in the New World, while regained in the Old, is very intriguing. This leaves several fascinating avenues for future research, when considering how the ecological pressures in the New and the Old Worlds vary,” says study co-author Dr. Vinod Kumar Saranathan. “For instance, one hypothesis would be differences in the light environments of the habitats between the New and the Old World, which can affect how these colors might be perceived, if indeed they can be, as our results suggest.”

The study is published in Proceedings of the Royal Society B.

This article was first published on September 28, 2020.