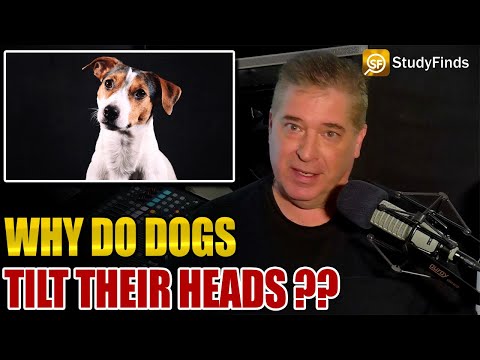 BUDAPEST, Hungary — A dog’s head tilt is often an adorable little act that their owners can’t get enough of. Now, a new study finds there may be an important reason behind this cute motion. Researchers from Eötvös Loránd University say the classic head tilt appears to be a sign that your dog is both smart and understands what you’re saying.

Using data from the Genius Dog Challenge, the team examined how intelligent some dogs are through their ability to learn the names of various toys. During this study, they found that dogs “present an asymmetry” when they hear a name they understand — such as tailing wagging, sniffing with their nostrils, or motioning with one particular paw. This motioning with just one side of the body is a sign a brain functioning.

“Tilting the head is yet another asymmetrical movement in dogs, but it had never been studied. We investigated the frequency and direction of this behavior in response to a specific human verbal vocalization: when the owner asks the dog to bring a toy by saying its name. We did so after realizing that it often happened when the dogs were listening to their owners,” explains lead researcher Dr. Andrea Sommese from the Family Dog Project at Eötvös Loránd in a university release.

Is your dog a ‘gifted’ canine?

Researchers looked at videos of dozens of dogs taking part in the Genius Dog Challenge, putting them through intensive training for three months. Testers placed toys in one room and the dog’s owner in another. During each trial, the owner asked their pup to fetch a particular toy by saying it’s name.

Normal dogs were only able to learn the names of just two of their toys, but a few canines learned several names without any trouble. These intelligent pups received the title “Gifted Word Learner” dogs.

“Over the course of two studies, carried out in several months, we observed the two groups of dogs: 33 typical dogs and 7 Gifted Word Learner dogs,” Dr. Sommese adds.

The head tilt may be the secret sign of intelligence

Sommese’s team recorded the presence (or lack thereof) of a head tilt when a dog’s owner asked their pet to find the right toy. Among gifted dogs, the team found that these pets often tilted their heads in the same direction when understanding which toy to retrieve. Typical dogs who only knew the name of one or two toys rarely did this.

This behavior remained consistent among the gifted dogs for a span of two years!

“It seems that there is a relationship between success in retrieving a named toy and frequent head tilts upon hearing its name. That is why we suggest an association between head-tilting and processing relevant and meaningful stimuli,” study co-author Shany Dror reports.

“It is important to notice that this study only investigated head tilts during a very specific dog-owner communicative interaction: when the owner asks the dog to fetch a named toy. Hence, it is important to refrain from thinking that only Gifted Word Learner dogs tilt their heads in other situations not tested in this study,” adds Andrea Temesi, another researcher working on the project.

The findings appear in the journal Animal Cognition.