BATH, United Kingdom — Successful women who make more money than their husbands still end up doing more housework than their spouse, a new study reveals. Although a woman being the breadwinner in a family is no longer a rare sight in society, a researcher from the University of Bath found these high-earners actually carried more of the load at home — even more than new mothers!

Study author Dr. Joanna Syrda says it’s rational to think that when husbands and wives share the income-earning responsibilities, they end up splitting more of the chores and parental duties. However, the study of more than 6,000 heterosexual marriages across North America found the opposite is true.

“Of course, we understand why specialized division of labor exists, but there is no reason for this specialization to be gender-specific. Traditional division has been conventionally explained by men earning more and working longer hours and has a certain logical appeal,” says Dr. Syrda in a university release.

“However, I found that the gender housework gap actually gets bigger for mothers who earned more than their spouses – the more they earned over their partner, the more housework they did.”

The ‘male breadwinner’ stereotype is still a part of society

Syrda believes the findings point to society still holding on to traditional gender identity norms when it comes to couples. Moreover, the “male breadwinner” stereotype is so entrenched in society that the researcher believes some high-earning women try to compensate for this at home.

“Married couples that fail to replicate the traditional division of income may be perceived – both by themselves and others – to be deviating from the norm. What may be happening is that, when men earn less than women, couples neutralize this by increasing traditionality through housework – in other words, wives do more and husbands do less as they try to offset this ‘abnormal’ situation by leaning into other conventional gender norms,” the study author explains.

In the past, Syrda notes that the economic argument for why mothers do more housework was so that their husbands had the time and energy to go out and work to provide for the family.

“We would therefore expect the balance of domestic labor to shift as more women enter the workforce, work longer hours and gain higher salaries – but that has not been the case! So, we need to look beyond economic theory to this traditionalizing effect and couples following traditional gender norms,” Syrda adds. 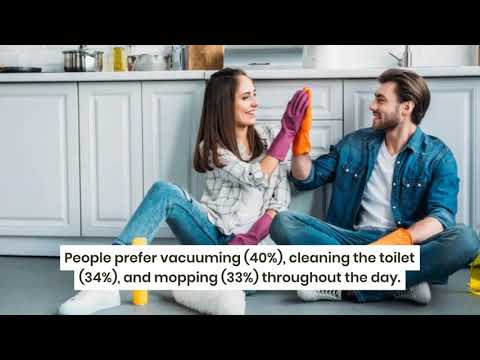 Did the gender revolution fail?

Although women have an advantage in some childcare tasks, the study only focused on housework like cooking, cleaning, and other work around the home.

“Therefore, it doesn’t necessarily follow that this should lead to gender-specific housework division – if the wife is the relatively higher earner, transition to parenthood shouldn’t result in a more traditional division of domestic labor as this wouldn’t improve the household’s overall quality of life. But this study suggests this is not the case.”

Syrda says the findings are important because the division of household labor is a major point of conflict in many relationships. Previous research has found that when couples become parents, the gap in the household chores widens even further. Having children also appears to strengthen the cultural norms surrounding gender-typical behavior.

“This is important, because how couples divide the increased domestic workload after becoming parents will be an important determinant of earnings inequalities between women and men over the course of their lives – a pattern once settled upon is often difficult to renegotiate. And these norms may be passed to their children,” the study author continues.

Syrda notes that “gender revolution” of the 1960s and 1970s brought a hope that men would have greater participation in domestic activities.

“Sadly, however, it looks like married men and women – especially married parents – have still not equalized the level of housework they perform, leading many of us to wonder how to restart this ‘stalled revolution’?”

The study is published in the journal Work, Employment and Society.