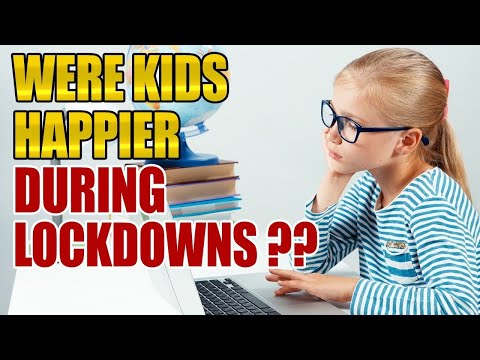 CAMBRIDGE, United Kingdom — The mental impact of living during pandemic lockdowns is a common topic these days, but did some people actually like it more than normal life? A new study finds one in three young people were actually happier during lockdown.

Researchers from the University of Cambridge say these teens and adolescents felt less lonely, avoided bullying, got more sleep and exercise, and their mental health improved while staying at home due to COVID-19 health mandates.

“The common narrative that the pandemic has had overwhelmingly negative effects on the lives of children and young people might not tell the full story. In fact, it seems as though a sizeable number of children and young people may have experienced what they felt was improved wellbeing during the first national lockdown of 2020,” says PhD student and study author Emma Soneson in a university release.

The findings come from a review of more than 17,000 students in the United Kingdom between eight and 18 years-old.

“After hearing from patients in our clinical practice and informally from several parents and young people that they thought the lockdown was beneficial for their or their child’s mental health, we decided to look at this trend,” Soneson says.

One-third thought their mental well-being improved during that nation’s first lockdown. The highest proportion of happier children were among respondents in school every day (39%) and those learning most days (35%).

Young people who reported feeling worse during lockdowns attended class just once or twice a week (39%). A similar number said they experienced no change at all. Students who felt better in lockdown were more likely to report positive lockdown experiences of school, home, relationships, and lifestyle. For example, compared with their peers, a greater percentage also reported decreases in bullying.

They also had improved relationships with friends and family, less loneliness, better management over their schoolwork, and had a better balance of sleep and exercise.

“What we’ve seen is a complex mix of factors that affect whether a child’s mental health and wellbeing was affected by the lockdown. These range from their mental health before the pandemic through to their relationships with their families and peers, and their attitudes towards school,” says Professor Peter Jones.

As the pandemic swept the world, many countries imposed strict rules, forcing workplaces and businesses to shut down. Schools were also closed to pupils apart from those whose parents were “essential workers” or those in “vulnerable” circumstances.

Several studies have reported that lockdown measures had a negative impact on the mental health and well-being of young people. This effect has not been uniformly reported, however, with a number of studies suggesting some may have benefited from staying in quarantine.

The team analyzed data from the OxWell Student Survey, carried out in June and July 2020, during the tail end of the first national lockdown in Britain. Participants answered questions about their experiences during the pandemic, including school, home life, and relationships.

Earlier research suggested youngsters worried about the impact on friendships. However, nearly half of those with better mental well-being in this study felt less left out and lonely and had better relationships with friends and family. This may be partly due to digital forms of social interaction mitigating the negative effects of reduced face-to-face contact.

With many parents and caregivers at home, there was also potential for improved family relationships. Specifically, most young people who had been bullied over the past year reported fewer incidents during lockdown. The proportion was higher for those who reported improved well-being (92%) than for those who reported no change (83%) or a deterioration (81%).

Some kids lived a more balanced life in lockdown

Around half (49%) of those with improved mental well-being reported sleeping more, compared with 30 and 19 percent who experienced no change or a negative impact, respectively. The proportion who reported they were getting along with household members better than before was also higher — 53 percent compared to 26 percent with no change and 21 percent seeing relationships sour. Study authors found a similar pattern in terms of getting along with friends.

“While the pandemic has undoubtedly had negative consequences for many, it is important to keep in mind that this is not the case for all children and young people. We are interested in how we can learn from this group and determine if some of the changes can be sustained in order to promote better mental health and wellbeing moving forward,” concludes Professor Mina Fazel.

Some influential school-related factors may also include flexible and tailored teaching that encouraged different styles of learning. Smaller class sizes and more focused attention for those attending school, and later waking times and more freedom during the school day may also play a role.

The study is published in the journal European Child and Adolescent Psychiatry.