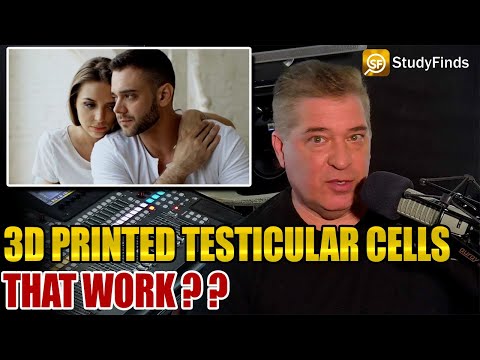 VANCOUVER, British Columbia — A male infertility cure may be on the horizon after scientists successfully 3D print human testicular cells. Researchers from the University of British Columbia say these new cells show promising early signs of being able to produce sperm — giving men back their ability to father children.

“Infertility affects 15 percent of couples and male factors are a contributing cause in at least half those cases,” says Dr. Ryan Flannigan in a university release.

“We’re 3D printing these cells into a very specific structure that mimics human anatomy, which we think is our best shot at stimulating sperm production. If successful, this could open the door to new fertility treatments for couples who currently have no other options.”

In men, tiny tubes called seminiferous tubules produce sperm within the testicles. However, for men with the most severe form of male infertility (non-obstructive azoospermia), there is no sperm in their ejaculate. Study authors say this is due to poor sperm production with the tubules.

For some men dealing with NOA, doctors perform surgery in an attempt to find extremely rare sperm. Unfortunately, Dr. Flannigan says this only works roughly half the time.

“For the other half of these individuals, they don’t have any options because we can’t find sperm for them,” Flannigan adds.

Building testicular cells from the ground up

In the new study, researchers performed a biopsy to collect stem cells from an NOA patient’s testicles. Study authors then grew these cells and 3D printed them into a hollow tubular structure — resembling the seminiferous tubules.

Results show that these cells survived for 12 days after printing, but that’s just the tip of the fertility iceberg. Study authors found that they started to mature into specialized cells which play a role in sperm production. They also showed “significant improvement in spermatogonial stem cell maintenance” — which is a key sign of a testicular cell’s ability to make sperm.

“It’s a huge milestone, seeing these cells survive and begin to differentiate. There’s a long road ahead, but this makes our team very hopeful,” Dr. Flannigan explains.

Flannigan’s team is now “coaching” their 3D-printed cells on how to produce sperm. By exposing them to different nutrients and growth factors, they hope to fine-tune the structure of these tubes to better carry out cell-to-cell interactions. If the team is successful, the tubes could produce sperm which can fertilize an egg through in vitro fertilization.

“Increasingly, we’re learning that there are likely many different causes of infertility and that each case is very patient specific,” Dr. Flannigan concludes. “With that in mind, we’re taking a personalized, precision medicine approach – we take cells from a patient, try to understand what abnormalities are unique to them, and then 3D print and support the cells in ways that overcome those original deficiencies.”

The study is published in the journal Fertility and Sterility Science.

Who wins Super Bowl LVII? Computers playing Madden NFL 23 have the answer — and the score!8 mins ago