NEW YORK — Do mosquitoes seek out the blood of some humans more than others? Researchers say yes, adding that organic acids and bacteria on people’s skin are the main molecular-level attractions for these pests.

Researchers from The Rockefeller University say individual odor differences between human beings are connected to minute skin microbiota, and not major external factors like alcohol or salty sweat. People with higher levels of skin-derived carboxylic acids are more attractive to mosquitoes. The study authors say there are several pseudo-theories about who or what mosquitoes like to bite — including women, children, specific blood types, blood sugar levels, or people who eat garlic and bananas. However, all of those have “little credible data” in support.

Some study participants were as much as 100 times more attractive “mosquito magnets” during tests, which primarily focused on different skin odors. The scientists report that in one case, mosquitoes swarmed – instead of going down one tube – towards a sample because of the carboxylic acid levels on one person’s skin.

“It’s the type of thing that gets me really excited as a scientist. This is something real. This is not splitting hairs. This is a huge effect,” says researchers Maria Elena De Obaldia in a university release.

Ultimately, the scientists say, you can’t hide from female mosquitoes, who use CO2 exhalations, body odor, and body heat to track down humans.

One major letdown from the study was that mosquitoes were able to find humans using either of their separate detection receptors, Orco and IR receptors. Even when the scientists disabled one receptor, the mosquitoes could still hunt down human skin.

“It could [have] lead to the development of more effective mosquito repellents,” says Leslie Vosshall, head of Rockefeller’s Laboratory of Neurogenetics and Behavior.

Separate Princeton University research earlier in 2022 revealed that some of the deadliest, disease-carrying mosquitoes in the world, Aedes aegypti, have evolved to the point that they only bite human beings. These mosquitoes, which carry the Zika virus, dengue and yellow fever, rely solely on the subsistence of human blood. Using brain-imaging equipment, the researchers sought to find out what odors or triggers cause these mosquitoes to pursue humans over any other animals.

“The simplicity surprised us,” says Carolyn “Lindy” McBride, assistant professor of ecology and evolutionary biology and neuroscience, in a statement. “Despite the complexity of human odor, and the fact that it doesn’t really have any kind of human-specific compounds in it, the mosquitoes have evolved a surprisingly simple mechanism for recognizing us. To me, it’s an evolutionary story: if we created a statistical test to differentiate human odor, it would be very complex, but the mosquito does something remarkably simple, and simple usually works pretty well, when it comes to evolution.”

The researchers initially tracked eight participants over the course of three years as they tested the attraction levels of the various odors. They later added 56 more people for mosquito magnet trials.

The study results on why mosquitoes bite some people and not others is published in the journal Cell. 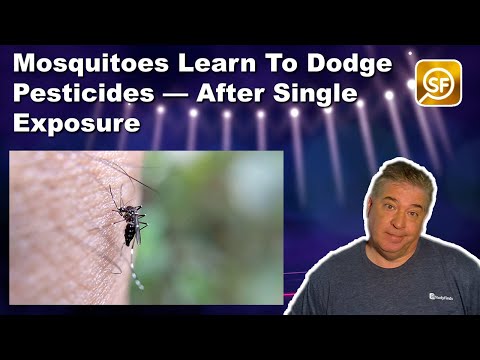 Entrepreneurs are often feverish workaholics. So what’s their secret to avoiding burnout?4 mins ago

Best Luggage For Kids In 2023: Top 5 Children’s Suitcases Most Recommended By Experts27 mins ago

Best Hotels In San Juan, Puerto Rico: Top 5 Places To Stay, According To Experts51 mins ago