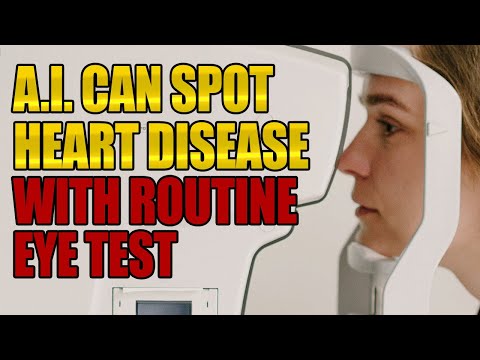 LEEDS, United Kingdom — An artificial intelligence system is capable of spotting whether someone will have a heart attack within the next year — through a routine eye scan.

A team from the University of Leeds believes this AI tool opens the door to a cheap and simple screening program for the world’s number one killer. Their tests find the computer can predict patients at risk of a heart attack in the next 12 months with up to 80 percent accuracy. The breakthrough adds to evidence that our eyes are not just “windows to the soul,” but windows to overall health as well.

“Cardiovascular diseases, including heart attacks, are the leading cause of early death worldwide and the second-largest killer in the UK. This causes chronic ill-health and misery worldwide,” project supervisor Professor Alex Frangi says in a university release.

“This technique opens-up the possibility of revolutionizing the screening of cardiac disease. Retinal scans are comparatively cheap and routinely used in many optician practices. As a result of automated screening, patients who are at high risk of becoming ill could be referred for specialist cardiac services,” Frangi adds.

“The system could also be used to track early signs of heart disease.”

Looking at the retina to discover red flags in the heart

The retina is a small membrane at the back of the eye containing light sensitive cells. Doctors have found that changes to the tiny blood vessels can hint at vascular disease, including heart problems.

Study authors used an advanced type of AI, known as deep learning, to teach the machine to automatically read more than 5,000 eye scans. The scans come from routine eye tests during visits to opticians or eye clinics. All of the participants are part of the UK Biobank, which tracks the health of half a million adults.

Deep learning is a complex series of algorithms that enable machines to make forecasts based on patterns in data. The technique, described in the journal Nature Machine Intelligence, could revolutionize heart therapy, according to the researchers.

The study identified associations between pathology in the retina and changes in the patient’s heart. Once the system learned each image pattern, the AI could estimate the size and pumping efficiency of the left ventricle from retinal scans alone.

This is one of the heart’s four chambers. An enlarged ventricle can increase the risk of heart disease. The computer combined the estimated size of the left ventricle and its pumping efficiency with data like age and sex.

The eyes are revealing a lot about disease and death

Currently, doctors determine this information using an MRI (magnetic resonance imaging) or echocardiography scans of the heart. The diagnostic tests are expensive and are often only available in a hospital. The tests can be inaccessible for many people in countries with lesser health care systems. They also increase health care costs and waiting times in wealthy nations.

“The AI system is an excellent tool for unravelling the complex patterns that exist in nature, and that is what we have found – the intricate pattern of changes in the retina linked to changes in the heart,” adds co-author Sven Plein of the British Heart Foundation.

A recent study discovered a similar link between biological aging of the retina and mortality. Those with a retina “older” than their actual age were up to 67 percent more likely to die over the next decade.

How do you save a friendship? Researchers suggest acting more like them37 mins ago