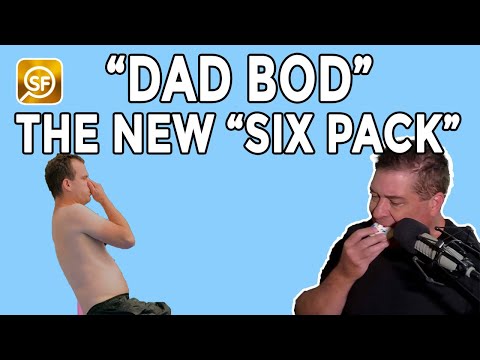 LINCOLNSHIRE, Ill. — Summer is here, and many men are working hard on their perfect beach bods — but a new survey finds most Americans are falling in love with love handles! The poll finds six in 10 people are fans of the “dad bod.”

For all those guys out there who just can’t get that sculpted six-pack, no worries! Have a fairly trim figure but could stand to lose five or 10 pounds? Not a problem! The survey of over 1,100 Americans, commissioned by Advanced Dermatology, found that 70 percent of women say they’re a fan of the dad bod. Nearly half of men (49%) say the same.

Moreover, 61 percent call dad bods attractive and 49 percent say they’re downright sexy. Afraid to take your shirt off at the beach? Don’t be! Forty-seven percent of respondents say they prefer a man with a dad bod over someone who’s really muscular. In fact, one in five Americans call the dad bod the “new six-pack.”

What exactly is a dad bod?

Nearly three in four people (73%) say having a dad bod means that person is still fit but is carrying a little extra weight. Roughly the same number add that having a dad bod is still healthy overall. An overwhelming 93 percent of Americans say they don’t judge men who have a dad bod.

When it comes to finding a date this summer, there’s even more good news for men looking to attract a member of the opposite sex. While 74 percent of men say a person’s body type matters when it comes to attraction, just 57 percent of women say the same.

Interestingly, 49 percent believe men with dad bods are more likely to have happier relationships and marriages than their muscled-up buddies. Two in three say the first term that comes to mind when they think of a person with a dad bod is “family man.”

It’s not just men who are packing on the pounds during the coronavirus pandemic. The poll finds 77 percent of all respondents say their physique has gotten worse over the last two years. In fact, 75 percent of men and 79 percent of women admit they’ve gained the “COVID-15.” One in three men add they’ve developed a dad bod during the pandemic.

While dad bods may be in style right now, 88 percent of men say they’d like to get back in shape this summer. Another 14 percent say they actually used all that time at home during COVID to get rid of their dad bod.

Overall, 44 percent have changed their diet and exercise routine in order to shed those pesky love handle and get themselves beach-ready.

Best Tablets For Kids In 2023: Top 5 Devices Most Recommended By Experts48 mins ago