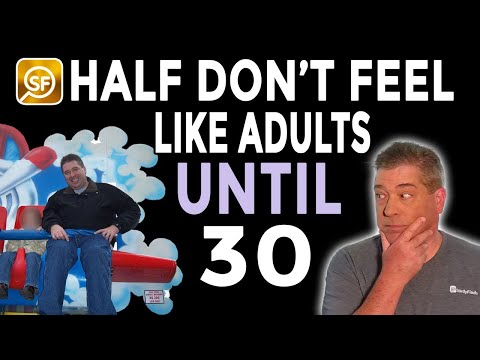 NEW YORK — Only half of Americans felt like an “adult” when they turned 18 — for those who didn’t, it took until just before they hit 30!

A recent survey of 2,000 Americans found adulting takes some time. While 53 percent felt like an adult when they hit 18, many say it took until they turned 29 for adulthood to truly sink in.

That might be one of the reasons why two-thirds of respondents believe 18 is an “arbitrary age” at which to consider someone an adult. Results found 59 percent still don’t always feel like an adult — and 79 percent of respondents agree that being an adult is more about actions than age.

Conducted by OnePoll on behalf of Avocado Green Brands, the survey delved into the different actions that have helped respondents to feel like an adult. Topping the list was living on their own (30%) for the first time, followed by buying a house (28%) and getting married (27%).

Rounding out the top five adult-like actions are opening their own bank account (27%) and having kids (26%). However, less traditional milestones also made the list, including a quarter of respondents who think doing their own taxes made them feel like an adult. The same number selected paying for their own phone plan.

Interestingly, both voting and buying “real” furniture feels like an “adult thing” for 25 percent of respondents. About a fifth felt like more of a grown-up after purchasing and wearing business casual clothes (19%) and after they started consistently watching the evening news (18%).

Does going green make you more of an adult?

Environmental actions also made the list — 17 percent think caring about the environment made them feel more mature, while the same number say shopping at places that offset their shipping costs contributed to that feeling.

“Feeling like an adult doesn’t come down to a single action or feeling,” says Avocado Green Brands Co-Founder and Chief Marketing Officer Mark Abrials in a statement. “It’s the broader understanding that we’re part of a larger ecosystem — and that it’s our responsibility to take care of ourselves, the community around us, and the planet that we depend on every day.”

It’s no surprise that two-thirds of respondents feel being an adult connects to how well they care for the environment. Furthermore, 71 percent believe adults have a responsibility to care for and protect the environment.

“Being an adult means being responsible for our actions,” Abrials says. “And that includes understanding — and mitigating — the environmental impact of our choices.” What’s the safest seat on a plane? Unfortunately it’s the least popular one24 mins ago