SAN DIEGO — A vast majority of Americans would prefer to hurt their own political party or cause if it means they don’t have to assist the opposition in any way.

In fact, 70 percent of U.S. adults from all political party affiliations would rather not donate to an opposing party, even if it means they will hurt their own, according to researchers from the University of California-San Diego. Nearly 4,000 individuals say they’d prefer to subtract $1, $10, or $100 from an opposing political party instead of donating the same or more to their own political party. This polarized zero-sum game was also true when researchers extended their investigation towards giving or taking money away from specific political causes like abortion or gun rights.

Researchers from UC San Diego’s Rady School of Management say this study reveals why it’s so difficult to cross the aisle under the country’s current – and increasingly toxic – Republican vs. Democrat duopoly. Americans appear to detest their political opposition so much that they’d prefer greater or equal harm to their own group in lieu of helping their political counterparts.

“Remarkably, we saw these results even though both conservative and liberal respondents noted they thought their side was more effective with funding,” the authors write in a university release. “In fact, our findings reveal that individuals are so averse to providing any support to the opposing group that they, on average, accepted triple the amount of financial loss to their group in order to avoid any gains for the other side.”

Political beliefs and other countries follow the same trend

In addition to the Democratic Party vs. Republican Party donation questions, the study also assesses how Americans would give or take from two divisive policy issues: gun rights and reproductive rights. Nearly three-quarters of study participants say they’d rather take money from an opposing pro-choice or anti-abortion group instead of giving to the cause they personally support. Similarly, they’d even harm a cause they support if it means they don’t have to give to the opposition.

The study authors note that previous research models for group decision-making started from the assumption that people are driven by a desire to benefit their own group or cause — not just to hurt the other.

Similar surveys in the United Kingdom found that such toxic partisanship is also true when scientists examine Conservative or Labour Party preferences. The team hopes to explore more cultures and political environments in future research.

“We find that participants do not make decisions in this context based on the expected real-world impact of their choice,” says Rachel Gershon, assistant professor of marketing at the Rady School. “Rather, they are influenced by the desire to protect their identity. They believe that supporting the opposing group will have a greater negative influence on their identity and therefore choose to harm their own group instead.”

Can Americans ever come back together?

Pessimistic partisanship and increasingly toxic political rhetoric have been mapped out in numerous studies recently. A Cornell University paper published in 2021 found the U.S. may be reaching an irreversible “tipping point.” The research highlights how events which previously unified Americans against a common threat, such as a foreign attack or a public health crisis, have now themselves become polarizing issues.

“We found that polarization increases incrementally only up to a point,” notes Cornell study author Michael Macy, director of the Social Dynamics Laboratory in the College of Arts and Sciences. “Above this point, there is a sudden change in the very fabric of the institution, like the change from water to steam when the temperature exceeds the boiling point.”

The survey, published in the Proceedings of the National Academy of Sciences, includes 3,876 participants and was conducted over the course of several years from 2019 through 2022. Among these individuals, there was an approximately even split between political party affiliation, ethnicity, and gender. 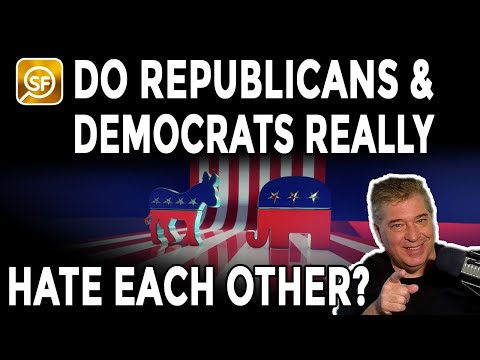