Electric cars are becoming more popular, and for a good reason. The best luxury electric cars are environmentally friendly, economical, and sleek looking as well. First, there were only electric sedans, and then manufacturers started releasing electric SUVs. Electric vehicles are becoming so trendy and advanced that even luxury car manufacturers are jumping on board. For drivers shopping around for a new ride, knowing which luxury electric car is best can certainly help narrow the list of choices.

Electric vehicles are certainly growing commonplace for many households. A recent study shows that 82% of younger drivers believe electric cars are the future and 72 percent between 18 and 40 would consider purchasing one.

Owning an electric car gives one an image of being eco-friendly, whether or not that is the buyers’ primary motivator for purchasing an electric car. While they’re known as an environmentally friendly alternative to gas cars, many people will purchase an electric car to save money at the gas pump or look cool. “In 2022, if a car isn’t electric, it isn’t premium.” says Gregor Hembrough, Head of Polestar North America. “The idea of luxury being defined by what’s ‘under the hood’ has been replaced in the electric era by seamless connectivity, integration into your digital ecosystems, and UX design.”

But if you’re looking for a luxury electric car, you may not know where to start. That’s why we’ve compiled a list of the best luxury electric cars on the market for those looking to indulge in high-end style and comfort without sacrificing their values. To create our list, we visited 10 “expert” sites that reviewed luxury EVs and came away with the five most frequently recommended models.

The List: Best Luxury Electric Vehicles, According To Experts

If you want a fantastic drive, top-notch technology, and a luxurious design all-in-one electric car, the Mercedes-Benz EQS is a top choice. Its interior is made of leather, tasteful unpolished wood, and other luxurious materials.

“The EQS grasps all the advantages an EV promises – smoothness, peace, effortless performance, and clever body packaging – and blends all of the above with everything Mercedes has learned over several decades of building classy plutocrat barges. It’s a superb vehicle to cover the distance in, to drive or in which to be driven, finished nigh-on perfectly and peppered with attention to detail,” says Top Gear.

The EQS’s most recognizable feature is a trio of digital displays hidden behind a single glass panel. It is a proclamation of purpose from one of the industry’s pioneers that it is not scared to compete with Tesla and other minimalist designers like them.

Motor Trends claims that “pulling up in a Mercedes-Benz S-Class [is] a guaranteed way to make an impact. Now Mercedes seeks to apply that gravitas to its new all-electric sedan: the EQS. First previewed as a concept car at the 2019 Frankfurt auto show, this full-size luxury sedan is the range-topping Model of EQ, the zero-emissions subbrand Mercedes is working to establish.”

True to its name, the Porsche Taycan is a car that’s as fast and powerful as it looks. But many other features make this car stand out from the rest.

CNET claims that “driving a Taycan tells a completely different story, and we’re confident that this is the best EV you can buy right now.” Moreover, the review adds that “even the base Taycan offers a driving experience that’s leaps and bounds beyond most other EVs on sale right now and does so with just 400 horsepower.”

As the first electric GTS model in Porsche’s history, the Taycan represents a turning point in automotive history as Porsche’s EVs are becoming more distinctive to appeal to more battery-power aficionados.

According to Forbes, during its first drive of the vehicle “there’s a heightened sense of purposefulness to Taycan GTS’s cabin thanks to the omnipresent Race-Tex material. The somber tone evokes workmanlike Porsche interiors of old and works for those more interested in functionality than flash. The steering wheel is easy to grip, and the seats hold you firmly in place.”

For those looking for a car with the performance and luxury of a supercar, look no further than the Audi e-Tron GT.

According to CNET, in terms of interiors, “the fit and finish are fantastic, and all of the trim pieces feel high-end. This GT has the $4,000 Full Leather Interior package, which adds leather to more surfaces, some microsuede panels, and perforated Nappa leather seats with honeycomb stitching. It has 18-way front sport seats with ventilation and massage functions to the front seats, and perforated flat-bottom leather steering wheel in place of the standard Alcantara wheel.”

In fact, according to Top Gear, Audi 2022 e-Tron GT was voted as this year’s winner by a panel of 102 international motoring journalists. Audi’s performance EV beat out 12 other vehicles to nab the 2022 World Performance Car award.

This is not surprising, as “the latest version of the Audi e-Tron GT is available with as much as 590hp and can do 0-100kph in a measly 3.3sec (if you opt for the top-spec RS variant). Top speed is set at 249kph, and with up to 488km of range on a single charge, it’s pretty practical, too,” Top Gear adds.

One of the most noteworthy cars to be launched in 2022, the Lucid Air is a car that blends speed, luxury, and cutting-edge technology to create a car unlike anything else on the market.

According to Car and Driver “Lucid Air is a remarkable first effort from a first-time automaker, and the sizable sedan is also an excellent EV.” Moreover, “the Touring model generates 620 horses, the Grand Touring makes 1050. An initial run of limited edition cars, called the Dream Edition and Dream Edition Performance, were good for 933 horsepower and 1111 horsepower, respectively.”

The Lucid Air was created to compete in the luxury sports category against the Tesla Model S and high-end vehicles from German automakers. Its objective is to equal the performance of sports convertibles while having a larger cabin and a smaller overall length and width.

Motor Trend writes that “a Lucid Air Grand Touring we tested delivered 800 hp, 885 lb-ft of torque, and an impressive 0-60 mph time of 3.0 seconds. Lucid also announced the Grand Touring Performance model, which contains 1,050 hp and 921 lb-ft. In our testing, it sprinted from 0-60 mph in just 2.7 seconds. Regarding range, we’ve experienced the Lucid Air nearly hitting 500 miles on a drive through California.”

Driving an electric car can help you minimize your impact on the environment. If you’re looking to buy one of the best luxury electric cars, you can’t go wrong with the Mercedes-Benz EQS, the Porsche Taycan GTS, the Audi e-Tron GT or the Lucid Air. 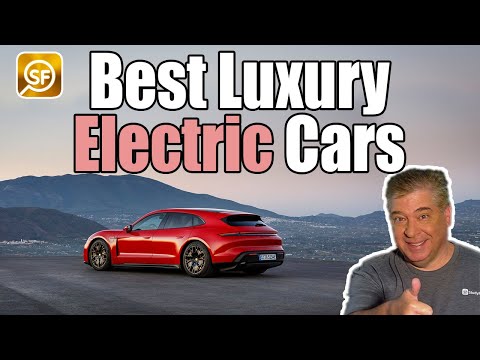 Note: This article was not paid for nor sponsored. Study Finds is not connected to nor partnered with any of the brands mentioned and receives no compensation for its recommendations.