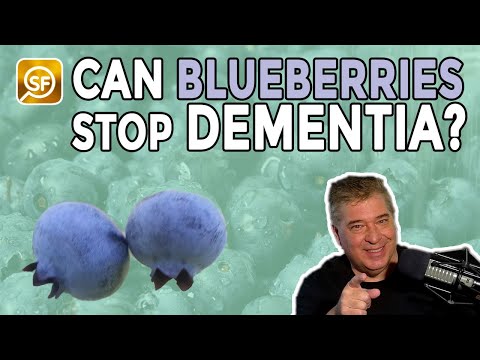 CINCINNATI, Ohio — An apple a day may keep the doctor away, but a new study finds blueberries may be better for your brain. Researchers from the University of Cincinnati have found that a half-cup of blueberries can keep middle-aged adults from developing dementia as they get older.

Moreover, the study finds adding the fruit to your diet lowers insulin levels and improves metabolic function — making it easier to burn fat for energy. It’s worth noting that the U.S. Highbush Blueberry Council of Folsom, California provided the funding for this research.

What makes blueberries so special?

Although blueberries are fairly similar to other berries and plants like red cabbage, study author Robert Krikorian notes this superfood contains high levels of micronutrients and antioxidants called anthocyanins. These give blueberries their classic color while defending the fruit against excess radiation exposure, plant viruses, and other potential threats.

Anthocyanins provide even more benefits when people eat them. These include reducing inflammation, improving metabolic function, and boosting energy production within the cells.

Previous studies by Krikorian’s team have focused on how blueberries improve the health of older adults. The new study looked at using blueberries as a preventative measure against age-related cognitive decline. Additionally, Krikorian says 50 percent of the U.S. population go on to develop insulin resistance — or prediabetes — during middle age. Prediabetes can increase the risk of developing other chronic diseases during old age.

“We had observed cognitive benefits with blueberries in prior studies with older adults and thought they might be effective in younger individuals with insulin resistance,” says Krikorian, a professor emeritus and director of the division of psychology in the UC College of Medicine’s Department of Psychiatry and Behavioral Neuroscience, in a university release. “Alzheimer’s disease, like all chronic diseases of aging, develops over a period of many years beginning in midlife.”

Researchers gathered 33 patients in the Cincinnati area for this study. Each person was between 50 and 65 years-old and was overweight, prediabetic, and started to experience mild memory decline. Studies show that these pre-existing conditions generally put people at higher risk for dementia.

During a 12-week experiment, the participants abstained from eating all other kinds of berry fruits except for a daily packet of supplement powder they mixed with water. The packet either contained the equivalent of a half-cup of whole blueberries or a placebo.

The group also took exams measuring their cognitive abilities. Specifically, the tests focused on skills that decline with age, such as working memory, mental flexibility, and self-control. Results show that the blueberry group displayed improved cognitive performance in comparison to the placebo group.

“This was evident as reduced interference of extraneous information during learning and memory,” Krikorian explains.

Participants in the blueberry group also saw their metabolic functions improve and they were more easily able to burn fat. Those consuming blueberries also displayed higher levels of mitochondrial uncoupling. This is an important cellular process which studies have linked to a longer lifespan because it reduces oxidative stress.

“The sample size is an obvious limitation of the study, so it will be important to reproduce these findings, especially by other investigators,” Krikorian concludes. “In the meantime, it might be a good idea to consume blueberries on a regular basis.”

The study is published in the journal Nutrients.

Best Of The Best Tortilla Chips: Top 5 Nacho Staples Most Recommended By Experts4 hours ago

Best Of The Best Hair Gels: Top 5 Sculpting Products Most Recommended By Experts47 mins ago

Presidential Tweets reveal when politicians get nasty, many voters tune out52 mins ago