NEW YORK — A cheap light may be able to wipe out harmful virus particles like COVID and the flu within five minutes. Researchers from Columbia University say installing these inexpensive bulbs can make the air in indoor spaces as fresh and safe as the outdoors.

In experiments, more than 98 percent of microbes were destroyed by a specific type of ultraviolet light, reducing the transmission of viruses. Levels remained very low even as scientists continued to spray microbes into the room — as long as the lights were on.

The technology uses a special ultraviolet light called far-UVC that has a lower range of wavelengths for disinfection. Ceiling lamps using far-UVC light could be a highly effective tool in protecting public health. Due to the way ultraviolet light kills microbes, viruses and bacteria cannot develop resistance as they do with vaccines and drug treatments.

“Far-UVC rapidly reduces the amount of active microbes in the indoor air to almost zero, making indoor air essentially as safe as outdoor air,” says co-author Professor David Brenner in a media release. “Using this technology in locations where people gather together indoors could prevent the next potential pandemic.”

The study in Scientific Reports is a revolutionary approach to wiping out potentially lethal illnesses.

“Far-UVC light is simple to install, it’s inexpensive, it doesn’t need people to change their behavior, and above all it’s a safe way to prevent the transmission of any virus, including the COVID virus and its variants, as well as influenza and also any potential future pandemic viruses,” Prof. Brenner continues. 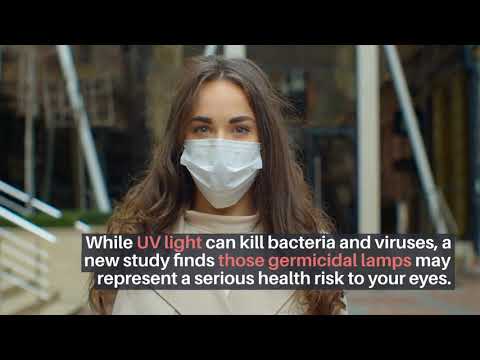 Scientists have known for years that conventional UV light rapidly kills bacteria and viruses. However, using these lights in homes or offices has not been possible because they damage the skin and eyes. Now, the international team has demonstrated that far-UVC light can work just as well without the potential side-effects of conventional germicidal UVC.

The shorter wavelength means this light can’t penetrate the skin and damage cells. Despite this, it still kills bacteria and viruses. The researchers carried out tests in full-sized rooms mimicking real-world conditions for the first time during this study.

Researchers determined the proper intensity for the light based on current regulatory limits set by the American Conference of Governmental Industrial Hygienists. The lamps produced the equivalent of 184 air exchanges per hour, surpassing any other indoor disinfection method by nearly 20 times.

“Our trials produced spectacular results, far exceeding what is possible with ventilation alone,” says co-author Kenneth Wood from the University of St. Andrews.

“In terms of preventing airborne disease transmission, far-UVC lights could make indoor places as safe as being outside on the golf course on a breezy day at St. Andrews.”

“What’s particularly attractive about far-UVC technology as a practical method of preventing indoor disease transmission is that it will be equally good at inactivating all future COVID variants, as well as new infectious viruses that have yet to emerge, while retaining efficacy against ‘old fashioned’ viruses like influenza and measles.”

Best Women’s Sunglasses In 2023: Top 5 Shades Most Recommended By Experts23 mins ago