TOKYO, Japan — Taking more time to savor your food may also help you avoid obesity, a new study suggests. Researchers in Japan have found that chewing more leads to the human body expending more energy and increasing the metabolism of food in the digestive system.

Previous studies have shown that chewing well is good for digestion and even helps lower the chances of gaining weight. However, the factors behind this heat-generating effect that chewing causes has been unclear — until now.

The new study reveals that oral stimuli, which has a connection to tasting food in the mouth, and the amount of time spent chewing both play a role in increasing how much energy someone uses while they eat. As a person chews their food longer, the body uses up more energy. This increases metabolism and intestinal motility, all of which leads to more heat generation by the eater after their meal. This process is called diet-induced thermogenesis (DIT).

Studies show higher levels of DIT also increase blood circulation in the splanchnic region of the abdomen. Dr. Yuka Hamada and Professor Naoyuki Hayashi from Waseda University set out to find the link between chewing time and DIT.

“We were unsure whether the size of the food bolus that entered the digestive tract contributed to the increase in DIT observed after slow eating. Also, do oral stimuli generated during prolonged chewing of food play any role in increasing DIT? To define slow chewing as an effective and scientific weight management strategy, we needed to look deeper into these aspects,” says Prof. Hayashi in a university release. 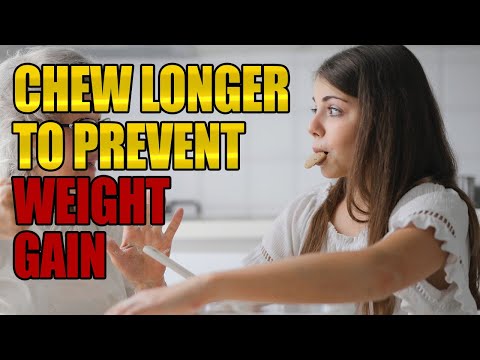 The team conducted three experiments involving volunteers eating a 20-milliliter sample of liquid food in three different ways. First, participants in a control group swallowed the test food normally every 30 seconds. In the second trial, volunteers kept the food in their mouths for 30 seconds without chewing, savoring the taste before swallowing. Finally, participants both chewed and savored the taste of their test food — chewing on it approximately once per second for 30 seconds and then swallowing.

Throughout the experiment, researchers measured factors including hunger, fullness, gas-exchange variables, DIT, and splanchnic blood circulation after each test meal. Results show each person’s level of hunger or fullness did not change depending on how they ate their food, but the body’s response to chewing more did.

The team also found that gas exchange, protein oxidation, and blood flow all increased the longer someone chewed their food. Study authors explain that as the splanchnic celiac artery in the abdomen supplies more blood to the digestive system, there is more healthy movement in the gastrointestinal tract. All of this leads to better digestion and less risk of metabolic conditions like diabetes and obesity.

“While the difference in energy expenditure per meal is small, the cumulative effect gathered during multiple meals, taken over every day and 365 days a year, is substantial,” Hayashi concludes.

The study is published in the journal Scientific Reports.