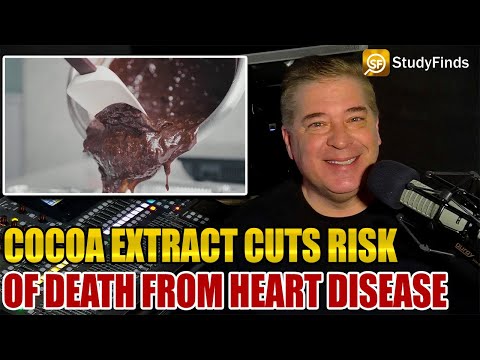 BOSTON — Could chowing down on chocolate be the key to stopping heart disease? Not exactly, but a new study finds a key extract in cocoa does significantly reduce the chances of dying from cardiovascular problems.

Researchers from Brigham and Women’s Hospital found that consuming cocoa flavanols lowered the risk of cardiovascular death by 27 percent. The findings come from the COcoa Supplement and Multivitamin Outcomes Study (COSMOS), which was a randomized, placebo-controlled trial comparing the benefits of taking a cocoa flavanol supplement or a multivitamin over three and a half years.

Although neither pill significantly lowered the main drivers of poor cardiovascular health, people taking cocoa flavanol supplements were 27 percent less likely to die from these events — such as a heart attack or stroke.

“When we look at the totality of evidence for both the primary and secondary cardiovascular endpoints in COSMOS, we see promising signals that a cocoa flavanol supplement may reduce important cardiovascular events, including death from cardiovascular disease,” says study leader Howard Sesso in a media release. “These findings merit further investigation to better understand the effects of cocoa flavanols on cardiovascular health.”

What other foods contain flavanols?

Study authors were quick to point out that their findings don’t mean people should rush to the store and start buying up all the chocolate. Moreover, for people who don’t have a sweet tooth, flavanols are also abundant in many other foods and beverages.

“Previous studies have suggested health benefits of flavanols — compounds in several plant-based foods including cocoa, tea, grapes, and berries,” notes study author JoAnn Manson. “COSMOS was not a chocolate trial — rather, it’s a rigorous trial of a cocoa extract supplement that contains levels of cocoa flavanols that a person could never realistically consume from chocolate without adding excessive calories, fat, and sugar to their diet.”

Prior studies have found that cocoa flavanols also have a positive impact on blood pressure levels. Others have even found a link to better brain health. However, researchers note these were generally short-term studies involving the chocolate extract. COSMOS, on the other hand, is the first study to look at the benefits of taking cocoa flavanol supplements on long-term cardiovascular health.

During the study, over 21,000 people randomly took either a daily capsule containing 500 mg of cocoa flavanols, a multivitamin tablet, both pills, or nothing at all.

Cocoa every day is even better for your health!

Results of the randomized trial found three key benefits of cocoa flavanol consumption. Although cocoa flavanol supplements only lowered the risk of experiencing cardiovascular events by 10 percent, the extract did cut the risk of dying from these heart problems by more than a quarter.

Third, the “composite endpoint,” or the measurable results of certain events, related to heart attacks, strokes, and cardiovascular deaths all significantly dropped off in severity among participants taking cocoa flavanols.

Meanwhile, taking a daily multivitamin did not have any significant impact on cardiovascular disease. Despite that, researchers say they did not see any safety issues from taking either cocoa flavanols or a multivitamin. The cocoa extract simply performed better when it comes to improving heart health.

“Although our study suggests intriguing signals for cardiovascular protection with cocoa flavanols, any health benefits due to taking these supplements will need confirmation in a future trial,” Manson says.

“Our message for consumers is to eat a healthy, balanced diet, rich in natural food sources of flavanols, and to stay tuned as we further evaluate other important health outcomes in COSMOS,” Sesso concludes.

The findings are published in The American Journal of Clinical Nutrition.