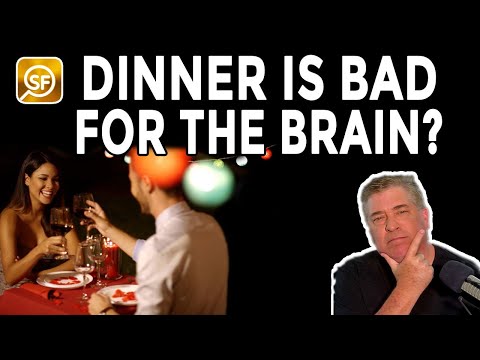 BOSTON — Does the time you have your meals every day play a role in your mental health? Could having dinner be contributing to rising rates of depression? New research shows that eating during the day instead of at night may lower the risk of anxiety and depression symptoms.

Researchers from Brigham and Women’s Hospital say their study adds to the growing body of research suggesting that having food shortly before bed is bad for the brain. Symptoms of depression and anxiety rise by 26 and 16 percent respectively after evening meals, their data shows.

The study could help explain why shift-workers and long-distance travelers are prone to neurological diseases, including dementia. The lifestyle disrupts the circadian rhythm, also known as the body clock.

“Our findings provide evidence for the timing of food intake as a novel strategy to potentially minimize mood vulnerability in individuals experiencing circadian misalignment,” says lead author Frank A. J. L. Scheer, Director of the Medical Chronobiology Program in the Brigham’s Division of Sleep and Circadian Disorders, in a statement. “They include people engaged in shift work, experiencing jet lag or suffering from circadian rhythm disorders.”

One-in-five people work irregular hours in this 24/7 society. They are needed in hospitals, factories and other essential jobs, including transportation. Nighttime shift work can send gray matter out of kilter with daily behaviors such as sleeping, waking, fasting and eating, increasing the risk of depression and anxiety by up to 40 percent.

‘Timing of food intake matters for our mood’

The authors investigated how meal timing affected the moods of 19 participants — 12 men and seven women. Volunteers underwent a protocol in dim light for four 28-hour “days” to invert behavioral cycles by 12 hours, causing circadian misalignment. A Daytime and Nighttime Meal Control Group had meals according to the cycle, resulting in eating both during the night and day which is typical among shift workers. Conversely, a Daytime-Only Meal Intervention Group had meals on a 24-hour cycle, eating only during the day. Depression and anxiety levels were measured every hour.

During simulated night shifts, depression and anxiety rose significantly when they also ate late. In contrast, there were no changes when meals were taken during the day — even though they were working at night.

“Meal timing is emerging as an important aspect of nutrition that may influence physical health,” says Chellapa. “But the causal role of the timing of food intake on mental health remains to be tested. Future studies are required to establish if changes in meal timing can help individuals experiencing depressive and anxiety/anxiety-related disorders.”

Adds Scherr: “Future studies in shift workers and clinical populations are required to firmly establish if changes in meal timing can prevent their increased mood vulnerability. Until then, our study brings a new ‘player’ to the table – the timing of food intake matters for our mood.”

In May scientists at the University of Texas found eating during the day instead of at nighttime could add years to your life. Experiments found it increased longevity by a third in mice. It added to evidence that having a hearty breakfast or lunch — and skipping an evening meal — is healthiest for humans.

Recent years have seen the rise of many popular diets that focus on intermittent fasting, which includes eating only during a period of six to eight hours per day.

“Our study adds to a growing body of evidence finding that strategies that optimize sleep and circadian rhythms may help promote mental health,” says Chellapa.