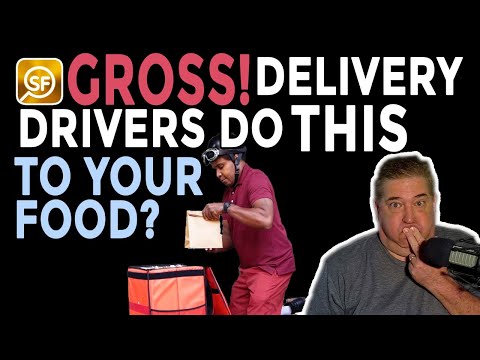 LONDON — Ordering takeout tonight? It might be a good idea to go pick it up yourself. A new survey finds eight in 10 food delivery workers admit to eating part of their customer’s order!

According to the poll of more than 500 delivery drivers, commissioned by Circuit Route Planner, stealing a customer’s fries or putting their sticky fingers on someone’s chicken may not even be the most disgusting thing happening on the way to the front door. One in four drivers confess that they’ve hooked up with someone in their vehicle. One in 10 have urinated on or near a customer’s home!

Another 10 percent say they’ve had to urinate in a bottle while making their deliveries. More than a quarter (27%) add they’ve had some “less-than-professional” conversations with the people they deliver goods to. What’s behind all this bad behavior?

While delivery workers may not be saints, the survey finds plenty of them have good reason to be angry. Researchers found that many customers aren’t treating these workers with courtesy or respect.

In fact, nearly three in four delivery drivers (73%) say the biggest reason they don’t like their customers is because they give bad tips. Moreover, three in 10 accuse customers of “tip baiting” when they use services like Instacart. Tip baiting is a scheme where customers place an order online, type in how much they intend to tip — usually a generous amount — and then zero out the tip after the delivery.

Over half the poll (57%) say they can’t stand when customers let their dogs bark and harass them during the drop-off. Three in 10 say customers are simply unfriendly when they receive their goods.

One in four get annoyed when customers order something and then aren’t home or don’t answer the door. The same number get frustrated by consumers who provide incorrect or nonexistent addresses. Two in five (42%) even say customers place orders just to use the delivery workers in their TikTok videos or other social media trends.

Two in three (68%) add that customers often accuse them of stealing items — even though many admit that this does happen (especially with food). You want WHAT delivered?

If you think your delivery drivers aren’t taking a peek at what you’re ordering, think again! Nearly four in five (78%) drivers admit that they judge customers based on the items they want delivered to their home.

Among some the weirdest order drivers have dropped off, respondents say they’ve delivered a 12-foot Christmas tree — in March! Others have delivered 20 ordered of French fries, a single bottle of water, and a lone donut!

Some customers, perhaps trying to avoid embarrassment at the store, have ordered condoms and sex lubricant for delivery — no judgments, maybe.