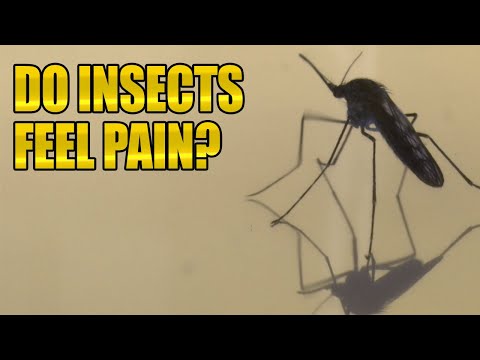 SYDNEY — Few people would hesitate to grab a newspaper and smash an annoying fly that’s been buzzing around the kitchen for hours. But if you’ve ever wondered whether bugs feel pain when you attempt to kill them, a new study is the first to prove that not only do insects feel pain from an injury, but they suffer from chronic pain after recovering from one.

Researchers from the University of Sydney in Australia say the discovery builds on prior research from 2003 that found insects experience a sensation related to pain.

“People don’t really think of insects as feeling any kind of pain,” explains co-author Greg Neely, an associate professor at the university, in a statement. “But it’s already been shown in lots of different invertebrate animals that they can sense and avoid dangerous stimuli that we perceive as painful. In non-humans, we call this sense ‘nociception’, the sense that detects potentially harmful stimuli like heat, cold, or physical injury, but for simplicity we can refer to what insects experience as ‘pain’.

“So we knew that insects could sense ‘pain’,” he continues, “but what we didn’t know is that an injury could lead to long lasting hypersensitivity to normally non-painful stimuli in a similar way to human patients’ experiences.”

Fruit flies show signs of chronic pain even after recovery

For the study, the authors damaged one leg on fruit flies and then allowed them to fully heal. They found that even after the fruit flies recovered, their uninjured leg grew more sensitive, a reaction likened to chronic pain in humans.

“After the animal is hurt once badly, they are hypersensitive and try to protect themselves for the rest of their lives,” says Neely. “That’s kind of cool and intuitive.”

Neely and his team then determined exactly how the insects experience such a response.

“The fly is receiving ‘pain’ messages from its body that then go through sensory neurons to the ventral nerve cord, the fly’s version of our spinal cord. In this nerve cord are inhibitory neurons that act like a ‘gate’ to allow or block pain perception based on the context,” says Neely. “After the injury, the injured nerve dumps all its cargo in the nerve cord and kills all the brakes, forever. Then the rest of the animal doesn’t have brakes on its ‘pain’. The ‘pain’ threshold changes and now they are hypervigilant. Animals need to lose the ‘pain’ brakes to survive in dangerous situations but when humans lose those brakes it makes our lives miserable. We need to get the brakes back to live a comfortable and non-painful existence.”

This type of chronic pain the flies experience is known as neuropathic pain, which in humans occurs from such conditions as sciatica, shingles, a pinched nerve, spinal cord injuries, or from other kinds of damage to the nervous system. Patients battling neuropathic pain typically report shooting or burning sensations.

Studies like these that help scientists understand the cause of chronic pain could eventually lead to the first treatments focusing on cause, rather than pain relief.

“Importantly now we know the critical step causing neuropathic ‘pain’ in flies, mice and probably humans, is the loss of the pain brakes in the central nervous system,” says Neely. “We are focused on making new stem cell therapies or drugs that target the underlying cause and stop pain for good.”

Best Of The Best Home Workout Equipment 2023: Top 5 Gym Set-Ups For Small Spaces, According to Experts2 hours ago

Chinese spy balloon shot down: Aerospace expert explains how these aircraft work and what they can see2 hours ago

Best Places To Live In Colorado: Top 5 Cities Most Recommended By Experts4 hours ago

Best Playgrounds For 2023: Top 4 Backyard Sets Beloved By Experts And Kids7 hours ago