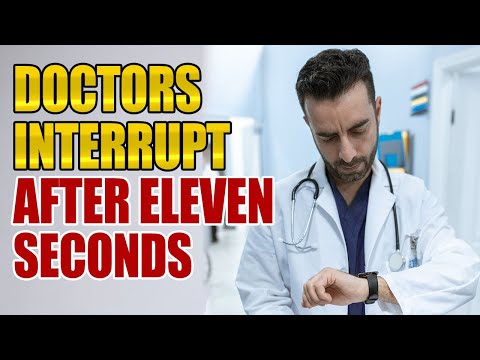 GAINESVILLE, Fla. — Ever feel like your doctor is in a rush to get you out the door when you come in for a visit? You’re not just imagining things. One study finds physicians give a patient an average of just 11 seconds to describe their issue before cutting them off.

Researchers from the University of Florida determined that for all the waiting we do after we arrive at a medical practitioner’s office, its the doctors who seem to have the least amount of patience. The study shows that just a third of physicians give patients adequate time to explain why they’re there.

“Our results suggest that we are far from achieving patient-centered care,” says study co-author Naykky Singh Ospina in a release, adding that medicals specialists proved to be in the biggest hurry, compared to primary care physicians.

Singh Ospina, who led the research team, sought to examine the flow of conversation between clinicians and patients. More importantly, researchers wanted to see how viable it was for the most important person in the room — the patient, of course — to lead the discussion. Her researchers secured videos of consultations that were filmed in clinics across the U.S. as training sessions for the physicians between 2008 and 2015.

The team specifically analyzed the first few minutes of the 112 consultations, looking to find out how frequently doctors let the patients dictate the conversation. This was done through inquiries such as, “Tell me what brings you in today,” or “What can I do for you today?” If patients were given the opportunity to set the agenda, the researchers then timed the responses to see how long they could speak before the doctor interrupted them.

The results show that just 36% of doctors ask questions that allowed patients to set the agenda, but two-thirds (67%) of those patients were interrupted after responding. Researchers calculated the doctors cut patients off 11 seconds on average into a response, while those who were able to describe their issue in full needed only six seconds to do so.

Researchers also found that only 20% of specialists give patients the opportunity to describe their issue at the onset of a consultation. Of course, it’s certainly possible it may be because they’ve already been briefed on a patient’s problem through a referral or a nurse’s inquiry. Conversely, half of primary care physicians reviewed in the study inquired about a patient’s agenda off the bat.

Still, Singh Ospina notes the importance of physicians — even if they’d previously been alerted to a patient’s reason for visiting — to allow people to discuss their concerns right away.

“Even in a specialty visit concerning a specific matter, it is invaluable to understand why the patients think they are at the appointment and what specific concerns they have related to the condition or its management,” she says.

As for reasons behind being in such a hurry, the authors suggest burnout that many doctors experience could prevent them from adequately serving their patients needs. Other factors include time constraints or simply not receiving strong enough training on how to communicate properly with patients.

The study is published in the Journal of General Internal Medicine.