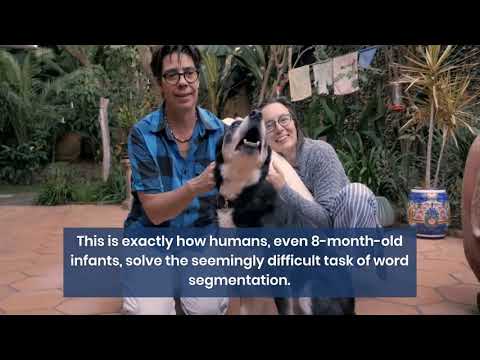 Young children can spot new words in a stream of speech long before they understand what they actually mean. When listening to someone speaking, they make complex calculations to determine where one word ends and another begins, which scientists call word boundaries.

However, whether other mammals can perform these intricate calculations to extract words from speech has remained a mystery. Now, researchers in Hungary have found that man’s best friend does just that.

“This is exactly how humans, even 8-month-old infants, solve the seemingly difficult task of word segmentation. They calculate complex statistics about the probability of one syllable following the other.”

“Dogs are the earliest domesticated animal species and probably the one we speak most often to,” Dr. Boros explains. “Still, we know very little about the neural processes underlying their word learning capacities.”

Each dog’s brain responded differently to different words and when researchers paired syllables together.

“But even more surprisingly, we also saw brain wave differences for syllables that always occurred together compared to syllables that only occasionally did, even if total frequencies were the same.”

The scans prove that dogs keep track of complex statistics, such as the chances of two syllables being paired, as well as simpler calculations.

“This has never been seen in other non-human mammals before,” Dr. Magyari continues. “It is exactly the kind of complex statistics human infants use to extract words from continuous speech.”

What’s going on inside a dog’s brain?

The researchers also scanned the dogs’ brains with a functional MRI machine to see whether they were using similar brain regions to humans. For this, experts trained the pups to lie still while study authors took the measurements.

“We know that in humans both general learning-related and language-related brain regions participate in this process,” Dr. Boros reports. “And we found the same duality in dogs.”

Both a dog’s specialist and generalist brain regions appear to play a role in the speech learning process, but the patterns of brain activity are also different.

“The specialist brain region, the so called auditory cortex, that in humans plays a key role in statistical learning from speech, showed a different pattern.”

Brain activity increases over time for the structured but not for the random speech stream.

“We believe that this activity increase is the trace word learning leaves on the auditory cortex,” Boros adds.

Scientists will need to conduct more research to determine how dogs have picked up these human-like skills. The team still doesn’t know how these human-analogue brain mechanisms for word learning emerged in dogs.

“Do they reflect skills that developed by living in a language-rich environment, or during the thousands of years of domestication, or do they represent an ancient mammalian capacity?” Dr. Attila Andics concludes.

“We see that by studying speech processing in dogs, even better dog breeds with different communication abilities and other species living close to humans, we can trace back the origins of human specializations for speech perception.”