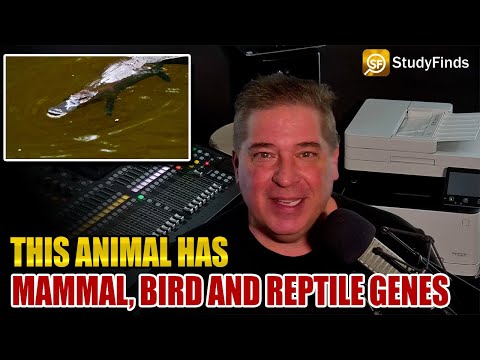 COPENHAGEN, Denmark — If you’ve ever seen a duck-billed platypus, you probably said “wow, what an odd-looking creature.” A new study finds you don’t know the half of it! An international team of researchers says the platypus may be the oddest mammal on Earth. After mapping the animal’s genome, the team finds your average platypus not only carries mammal genes, but bird and reptile genes too!

Researchers from the University of Copenhagen say this beaver-like mammal from Australia has a whole list of bizarre characteristics. For starters, the platypus lays eggs instead of having live babies. Although it has webbed feet and is an excellent swimmer, it has fur that glows under UV light. The platypus even sweats milk and has extremely venomous spurs on its legs.

If that’s not odd enough for you, the platypus is one of the few mammals that have no teeth. It doesn’t end there though, as scientists say these creatures also have 10 sex chromosomes in their genes while mammals like humans only carry two.

“The complete genome has provided us with the answers to how a few of the platypus’ bizarre features emerged. At the same time, decoding the genome for platypus is important for improving our understanding of how other mammals evolved — including us humans. It holds the key as to why we and other eutheria mammals evolved to become animals that give birth to live young instead of egg-laying animals,” explains Professor Guojie Zhang from Copenhagen’s Department of Biology in a university release.

The study finds the platypus belongs to an ancient group of mammals called monotremes. These animals existed millions of years before modern-day mammal species emerged on Earth. Unlike many species that lose several of their prehistoric genes however, this Swiss Army knife of animals still carries many of the same features its ancestors did.

“Indeed, the platypus belongs to the Mammalia class. But genetically, it is a mixture of mammals, birds and reptiles. It has preserved many of its ancestors’ original features — which probably contribute to its success in adapting to the environment they live in,” Prof. Zhang says.

Researchers say one of this mammal’s strangest characteristics is that it lays eggs. At the same time, it still has mammary glands to feed its children. However, the platypus does this by sweating out milk rather than producing it from nipples.

Study authors explain that humans lost all three of their vitellogenin genes during evolution. These are the genes responsible for making egg yolks. Chickens, obviously, have all three of these genes. The genetic study reveals that the platypus still carries one of these three vitellogenin genes. This is how the platypus continues to lay eggs instead of having live births.

Unlike species that need all three genes to make eggs, the platypus only needs one egg-laying gene because it also produces milk for its young. Researchers add the other two genes dropped off during evolution around 130 million years ago.

Researchers also discovered that these Australian creatures produce milk similar to cows and humans even though they sweat it out. This is because the lost vitellogenin genes have been replaced by casein genes. These genes produce proteins which are key to mammal milk.

“It informs us that milk production in all extant mammal species has been developed through the same set of genes derived from a common ancestor which lived more than 170 million years ago — alongside the early dinosaurs in the Jurassic period,” Zhang explains.

The team also uncovered what happened to the platypus’ teeth. Although their nearest ancestors did have teeth, today’s platypus has two horned plates which mash up bugs and shellfish to eat. Their genes reveal the species lost their teeth around 120 million years ago after four of the eight genes which make teeth disappeared from their genome.

As for their extra sex chromosomes, study authors say the 10 chromosomes show a platypus actually has more in common with a chicken than humans. Unlike people who have an X and Y chromosome, the platypus has five X and five Y DNA molecules.

Currently, the duck-billed platypus is classified as a protected species. The International Union for Conservation of Nature considers them near-threatened.

The study appears in the journal Nature.

Best Subway Subs In 2023: Top 5 Menu Items Most Recommended By Experts35 mins ago