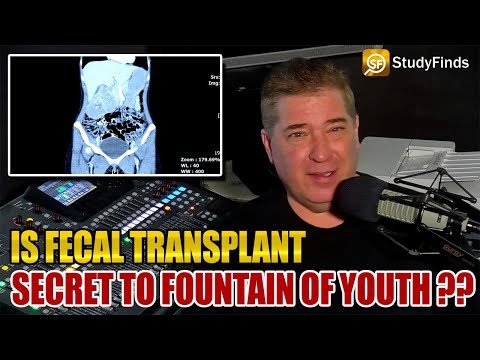 NORWICH, United Kingdom — What’s the secret to eternal youth? As scientists look for ways to extend life, a new study suggests the answer to healing older brains may be hiding in younger guts. Researchers say fecal transplants not only affect your gut health, they can alter your brain too.

An international team finds fecal transplants from older to younger mice impacts the learning and memory abilities of the recipient. By altering the gut microbiome of the younger mice, researchers say they began to act more like their older donors. These changes included some of the same cognitive impairments older brains suffer from.

“Research has shown that the aging process may be linked with age-related changes in our gut microbiota,” Dr. David Vauzour from the University of East Anglia says in a release. “We wanted to see whether transferring gut microbes from older to younger mice could affect parts of the central nervous system associated with aging.”

What is a fecal transplant?

Simply put, fecal transplants involve taking stool from a healthy person and placing it in the colon of someone else. In humans, the recipient is usually someone who is very sick and could have a bacterial infection.

Since the gut contains both good and bad bacteria, using antibiotics can sometimes get rid of the helpful ingredients your body needs to stay healthy. Using the bacteria from a healthy donor’s poop adds in the right materials to properly balance the human microbiome. The procedure can even help patients dealing with serious conditions like ulcerative colitis, Crohn’s disease, and cirrhosis.

What does this have to do with your brain?

“Recently, the existence of two-way communication between the gut and the brain – known as the ‘gut-brain axis’ – has emerged as an important player in shaping aspects of behavior and cognitive function,” Dr. Vauzour explains.

After implanting the fecal material in younger adult mice, researchers studied how the transplant affected anxiety, exploratory behavior, and memory in each patient. The results show younger mice don’t display significant changes in terms of anxiety or behavior. They did however begin to show problems with spatial learning and memory. The young mice had trouble running through a maze test, just like older and mentally impaired mice do.

When examining this further, the team finds there are alterations in the proteins which have ties to neuro transmission. There are also changes in the cells of the hippocampus. This area of the brain forms new memories and helps control learning and emotions.

“Our research shows that a fecal transplantation from an old donor to a young recipient causes an age-associated shift in the composition of gut microbiota,” Vauzour adds. “In short, the young mice began to behave like older mice, in terms of their cognitive function.”

After proving fecal transplants can work in one direction, researchers are now looking at transplants from younger to older patients. If the procedure works in this direction, the team theorizes that the changes could reverse cognitive damage of old age.

“While it remains to be seen whether transplantation from very young donors can restore cognitive function in aged recipients, the findings demonstrate that age-related shifts in the gut microbiome can alter components of the central nervous system,” Prof. Claudio Nicoletti from the University of Florence says.

“This work highlights the importance of the gut-brain axis in aging and provides a strong rationale to devise therapies aiming to restore a young-like microbiota to improve cognitive functions and quality of life in the elderly.”

“Manipulating the microbiome is increasingly being seen as a way of improving or maintaining human health, and these results are an exciting indication of its potential for helping us age healthily” adds Prof. Arjan Narbad from the Quadram Institute.

The study appears in the journal Microbiome.