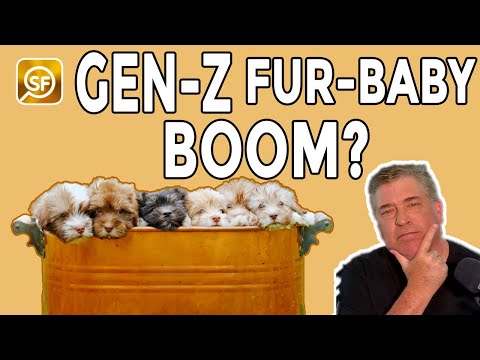 TULSA, Okla. — Generation Z may end up bringing on a “fur-baby boom” — since most of them don’t want to actually have kids! A new poll reveals seven in 10 young adults in Gen Z would rather adopt a pet than have their own children.

Gen Z adults aren’t the only ones choosing pets over people; millennials are as well! In a survey of 1,000 pet owners, commissioned by ConsumerAffairs, researchers found that 57 percent of millennials love their pet more than their own sibling! Half of them said the same thing about their mother and 30 percent chose a pet over their significant other!

Overall, 81 percent of millennial pet owners say they love their pet more than at least one family member — more than baby boomers (77%) or Generation X respondents (76%). Interestingly, cat owners (85%) were slightly more likely to choose their pet over a relative than dog owners (83%).

Sparing no expense for our pets

When it comes to taking care of our furry companions, millennials spend more than any other group to keep them healthy. On average, millennial pet owners budget $216 a month for their pets and spend roughly $198. Gen X adults only budget $161 and spend $141 each month on pet care.

For bigger medical issues, 60 percent of millennials are “very” or “extremely” confident in their ability to afford life-saving treatment for their pets. For those who can’t, one in four said they would sell their car if it meant saving their furry friend. The survey also revealed that some states are more pet-friendly than others, with Maine ranking as the top place for pet parents in the U.S.

Researchers looked at two key features to determine how pet-friendly a state is. The first is the number of dog parks per 100,000 residents — which the National Recreation and Park Association says enables pets and their owners to exercise and socialize. Next, the team compared the number of pet owners in a state to the number of local veterinarians.

“After all, the availability of good health care is another important aspect for pet owners to consider when deciding where to live,” the ConsumerAffairs team writes in a statement.

Following Maine was Vermont (2nd), Montana (3rd), Oregon (4th), and Wyoming (5th). Conversely, it turns out city life is the worst thing for pets and their owners, as New York finished as the least pet-friendly state in the country. Neighboring New Jersey and Rhode Island tied for the second-worst pet-friendly state. Spoiled rotten: Shopping with the kids adds nearly $50 extra in expenses11 mins ago