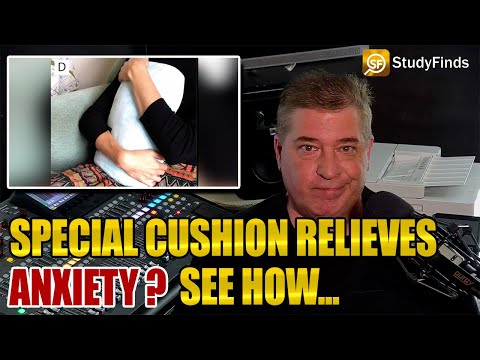 BRISTOL, United Kingdom — Scientists have created a “breathing” cushion that can actually help young people ease their anxiety. Researchers from the University of Bristol say hugging the cushion relieved the symptoms of stress in students before taking major tests.

It was effective as meditation techniques, offering hope of settling young people down who may be stressing over their schoolwork.

“We were excited to find that holding the breathing cushion, without any guidance, produced a similar effect on anxiety in students as a meditation practice. This ability of the device to be used intuitively opens it up to providing wider audiences with accessible anxiety relief,” says Dr. Alice Haynes in a media release.

The touch-based cushion described in PLOS ONE mechanically mimics breathing.

Treatments for anxiety disorders primarily include costly therapy and medications which may have unwanted side-effects. At-home anxiety aids could complement therapies and also benefit people experiencing temporary attacks. A growing body of evidence highlights the potential of neuroscientific wearables known as TouchPoints. They are clinically proven to provide fast relief from stress and improve sleep and focus.

Scientists also developed a therapeutic robot baby seal called PARO which is interactive — and very cute. The devices are meant to have a relaxing effect and elicit emotional responses in hospital patients and nursing home residents — similar to animal-assisted therapy except using robots.

Now, Dr. Haynes and colleagues have created the cushion. They initially built several prototypes that simulated different sensations, including breathing, purring, and heartbeats. Each took the form of a soft, huggable cushion that is both intuitive and inviting. Focus groups identified the “breathing” version as being the most pleasant and calming.

The researchers then made a larger, mechanical cushion and recruited 129 volunteers for an experiment involving a mathematics test. Using questionnaires, study authors found those using the cushion were less anxious pre-test than peers who did not.

A hug can be as helpful as meditation

The experiment also compared the breathing cushion to a guided meditation and found that both were equally effective at easing anxiety. Researchers now hope to further refine the cushion for testing in people’s homes. They also plan to investigate people’s physiological response to the device. For instance, how does hugging the breathing cushion change heart rate or breathing patterns? This will elucidate the particular mechanisms by which the device might ease anxiety.

“Feedback from workshops suggested simulating breathing through a huggable cushion produced a calming and enjoyable interaction,” Dr. Haynes tells SWNS in a statement. “Conducting a formal psychological study found hugging the cushion had a similar effect as a breathing meditation in alleviating students’ anxiety when anticipating a test.”

“This suggests the cushion could offer students additional support during examination periods, but also that the cushion is intuitive to use and so could be beneficial to a wider range of audiences,” the researcher adds.

Study authors expected the invention to provide some relief but were surprised at just how effective it really was.

“We feel this demonstrates the power of touch as an intuitive and supportive modality,” Dr. Haynes says, according to SWNS. “The haptic field has expanded rapidly in recent years, demonstrating many beneficial applications for tactile devices.”

“We hope this study provides additional encouragement to designers and researchers to incorporate haptics in their work within the sphere of health and well-being,” Haynes concludes. “We have been continuing our research and are especially interested in measuring physiological responses to the breathing cushion as well as incorporating more interactivity into the device.”

Alien ice? Scientists discover new type of ice that could lead to finding extraterrestrials51 mins ago

5 Best (And Super Easy) Ways To Strengthen Your Brain, According To Experts3 hours ago