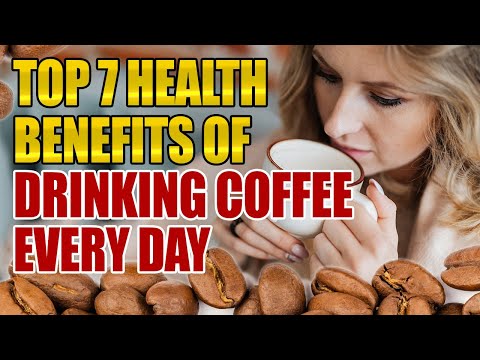 Coffee lovers around the world who reach for their favorite morning brew probably aren’t thinking about the ways it improves their health. Most people are drinking coffee simply because of its ability to provide a much-needed energy boost from caffeine. However, according to numerous studies, coffee also offers fantastic health benefits.

There’s no shortage of studies showing just how great drinking coffee can be for our bodies. Here are seven health benefits of coffee, we especially appreciate, that have been confirmed in studies published on StudyFinds.

It may add years to your life

Drinking coffee lowers the risk of death from a variety of common diseases and conditions. In a study of more than 185,000 people, scientists found that all racial groups— Whites, Asians, African Americans, and Hispanics — had a 12 percent lower incidence of death due to heart disease, cancer, stroke, diabetes, respiratory problems, or kidney disease when they drank one cup of coffee a day.

This decrease in mortality was even greater — 18 percent — for those who drank two to three cups a day.

“We cannot say drinking coffee will prolong your life, but we see an association,” says V. Wendy Setiawan, senior author of the study. “If you like to drink coffee, drink up! If you’re not a coffee drinker, then you need to consider if you should start.”

In a separate analysis of coffee research, scientists at the University of Southampton in England reviewed 218 previous studies to help determine the outcomes that coffee consumption has on health. They conclude that enjoying three to four cups of steaming java a day can not only help one reduce their likelihood of dying or suffering from heart disease, but it may also lower their risk of getting diabetes, liver disease, dementia, and certain cancers.

Improvement in test performance and alertness — just by its scent

That’s right, simply the smell of a cup of joe can help you perform better on tests. In one study, 100 undergraduate business students were enlisted to take a 10-question GMAT algebra test. Some students completed their exam in a computer lab that smelled of coffee, while the others worked in an unscented room.

The test results showed students in the room that reeked of coffee scored markedly higher on their test. In fact, the smell of coffee, they found, even added an extra layer of confidence for test-takers, increasing their expectations of performing better on the exam. Scientists believe the study should have wide-ranging implications. The scent of coffee may even help employees feel more enthusiastic or productive in the office.

“Olfaction is one of our most powerful senses,” says study co-author Adriana Madzharov, a Stevens School of Business professor. “Employers, architects, building developers, retail space managers and others, can use subtle scents to help shape employees’ or occupants’ experience with their environment.”

Confirming these results, another study finds that the smell or thought of coffee improves focus, too. In that experiment, 871 participants were exposed to coffee-related cues (smells, sounds, images) in four separate experiments. The cues were designed to make participants think of the beverage and the caffeine it carries without ingesting it.

Results also show that priming people with coffee smells and other cues increased their alertness, energy levels, heart rate, and narrowed their focus.

Brown adipose tissue, more commonly referred to as brown fat, was thought to only be found in human infants and hibernating mammals. Scientists, however, discovered that human adults can have brown fat as well. Essentially, brown fat creates body warmth by burning calories.

The study is the first to show how brown fat can be stimulated in adults. Using thermal imaging on individuals immediately after drinking a cup of coffee, they concluded that caffeine indeed stimulates brown fat cells.

It can make your favorite dessert taste sweeter

If you usually hold off on a cup of coffee with dessert, here’s a reason to change that habit. Researchers reveal that the beverage influences our sense of taste. After a single cup, sweets taste that much sweeter and bitter sensations aren’t as intense. This may explain why dark chocolate doesn’t taste as strong when paired with hot java.

A total of 156 study participants had their sense of smell and taste tested after drinking a cup of coffee. The coffee didn’t influence their sense of smell at all, but there were noted differences in taste across the board. “When people were tested after drinking coffee, they became more sensitive to sweetness, and less sensitive to bitterness,” says Alexander Wieck Fjældstad, associate professor at Aarhus University.

The authors say this is one coffee study that has nothing to do with caffeine either. They recreated their experiment using decaf coffee and the relationship between coffee and taste still held true.

Drinking coffee every day could keep prostate cancer at bay — and even improve chances of survival in patients.

Chinese scientists found that regular coffee drinkers are around 10 percent less likely to develop prostate cancer. According to the American Cancer Society, one in eight men will be diagnosed with prostate cancer in their lifetime. One in 41 will die from the disease.

A report shows having an extra cup or two coffee may make you less likely to develop Alzheimer’s disease.

Coffee-drinking habits and instances of cognitive decline were tracked more than 200 Australians over the course of a decade. “We found participants with no memory impairments and with higher coffee consumption at the start of the study had lower risk of transitioning to mild cognitive impairment – which often precedes Alzheimer’s disease – or developing Alzheimer’s disease over the course of the study,” explains lead investigator Dr. Samantha Gardener.

The study suggests that drinking more coffee has a positive effect on various aspects of brain health including executive function abilities which include planning, self-control, and attention. More coffee also appears to promote a slowing of amyloid protein buildup in the brain, considered a precursor to Alzheimer’s onset.

So how much coffee should you be drinking? Researchers say that if you typically only have one cup of java per morning, don’t feel guilty about heading back to the coffeepot for a second helping. That being said, the study did not determine the “ideal” or “maximum” amount of coffee one should be drinking.

“If the average cup of coffee made at home is 240g, increasing to two cups a day could potentially lower cognitive decline by eight percent after 18 months,” Dr. Gardener adds.

Having trouble getting some pep in your step when you hit the treadmill or hop on the Peloton? Scientists say coffee may be just what you’re looking for.

In this study, 38 men and women completed a five-kilometer cycle on an exercise bike without drinking anything beforehand. The next day, some participants drank either coffee or a coffee-flavored placebo an hour before performing the same task. A third group again drank nothing.

The results showed that participants in the coffee group completed their cycle faster than participants in the placebo and control groups. Researchers also reported that the observed effect of coffee on cycling performance is similar between men and women.

So what are you waiting for? Don’t walk — run to the coffee maker so you too can start enjoying these great health benefits from drinking coffee, if you’re not already. As always, any dietary and lifestyle changes should always first be discussed with your doctor. But we hope this list of benefits from coffee will make you feel even happier about that morning mug.