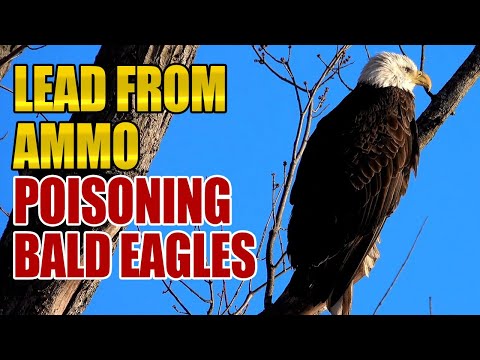 ITHACA, N.Y. — The comeback of bald eagles may be in danger, not from hunters, but from the ammunition hunters use to kill other animals. Researchers from Cornell University report that the bald eagle’s resurgence is at risk due to lead poisoning from bullet fragments in the majestic bird’s food.

In the decades following World War II, widespread domestic use of the pesticide DDT decimated local bald eagle populations across the United States, putting the species at risk of extinction. Officials banned the use of DDT in 1972. Since then, bald eagle numbers have slowly rebounded.

Now, the new study reveals lead poisoning caused by the consumption of dead animal carcasses left behind by hunters has reduced the population growth among American bald eagles by four to six percent annually in the Northeast.

“Hopefully, this report will add information that compels hunters, as conservationists, to think about their ammunition choices,” says senior study author Krysten Schuler, assistant research professor in Cornell’s ­­Department of Public and Ecosystem Health, in a university release. “Even though the population seems like it’s recovered, some perturbation could come along that could cause eagles to decline again.”

“We haven’t collected data on these other species in the same way that we pay attention to eagles,” Prof. Schuler explains. “We’re putting eagles out there as a poster species for this issue, but they’re not the only ones being impacted.”

Overall, estimates show total bald eagle numbers across the Northeast increased between 1990 and 2018. However, deaths linked to lead poisoning decreased eagle growth rates by 4.2 percent for females and 6.3 percent for males.

The study is published in the Journal of Wildlife Management.