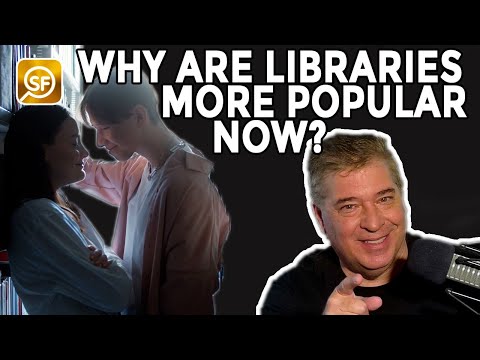 TAUNTON, Mass. — Who’s says no one reads paper books anymore? A new study finds your local public library may be the hottest place to be in town.

Researchers from data and analytics group WordsRated looked at nearly 17,500 libraries over the last three decades and found that these institutions aren’t dying in the digital age — they may actually be thriving. Although visits to U.S. libraries have dropped by 21 percent since 2009, there are actually more people borrowing books than ever before.

Specifically, over 174 million people in the country are registered at a local library. That’s nearly 54 percent of the population.

Going digital in a big way

A decade ago, physical books, magazines, newspapers, and video or audio tapes accounted for 98 percent of the material you would find in a library. By 2019, however, that number stands at just 45 percent as libraries convert more and more items to a digital format. Ebooks now make up a third of the typical library’s collection, with paper books falling to about 40 percent of what’s on the shelf.

Communities are doing more in libraries than they used to

The local library is no longer just a place to pick out books or get material for school projects. The study finds U.S. communities are using these spaces for local programs more and more. With nearly six million programs for children, young adults, and people of all ages taking place inside libraries, one in every 10 people visiting a library are now doing so to attend a local program.

Where do libraries get their funding?

While some may think the government pays the bills for public libraries, it may be surprising to learn that government funding doesn’t cover library operating expenses.

It turns those little late fees add up! Between donations, grants, fines, and fees, the study finds libraries actually have a $17.05 billion budget surplus. That’s really good news, since it’s never been more expensive to run a library than it is today.

In 2019, the average cost of operating a public library was $765,715, an increase of 17 percent from 2014. That doesn’t even take into account the impact of inflation over the last year.

Interestingly, the vast majority of those costs go towards paying the people who keep libraries open. Nearly 90 percent of library costs go towards paying staff and other expenses. Just 10 percent actually help take care of library collections. Despite those findings, researchers say library staff are still paid about 35 percent less than the average livable wage for a family of three.

Speaking of money, the study finds that when libraries have more funding, more people walk through the doors. In comparison to the lowest-funded libraries, the nation’s libraries with the most funding see an 81 percent increase in visits each year. They also have nearly 10 percent more registered borrowers and host 73 percent more local programs.