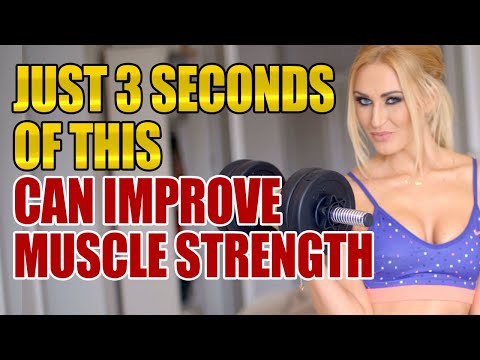 JOONDALUP, Australia — No time for exercise? No problem! A new study finds lifting weights for as little as three seconds a day can still have a positive impact on your muscle strength in the long run. Researchers in Australia and Japan found that performing a single bicep curl at maximum effort can lead to a 10-percent increase in muscle strength in just one month.

A team from Edith Cowan University and Niigata University of Health and Welfare studied 39 healthy college students who performed one muscle contraction at max effort for three seconds a day, for five days a week over four weeks. These students did their curls in one of three different ways, performing an isometric, concentric, or eccentric bicep curl during the experiment.

Researchers measured each person’s maximum voluntary contraction strength before and after the weightlifting program, as well as the strength in a group of 13 students who did not exercise at all for those four weeks.

Results show that performing just one eccentric bicep curl every day led to the greatest increases in muscle strength in comparison to the other two methods. Unsurprisingly, the group not exercising did not see any benefits.

“The study results suggest that a very small amount of exercise stimulus – even 60 seconds in four weeks – can increase muscle strength,” says lead researcher Professor Ken Nosaka from ECU’s School of Medical and Health Sciences, in a university release.

“Many people think you have to spend a lot of time exercising, but it’s not the case. Short, good quality exercise can still be good for your body and every muscle contraction counts.”

What is an eccentric bicep curl?

Although a normal bicep curl probably involves all three of these weightlifting motions, you can actually break this action down into separate exercises. An isometric contraction means the muscle is stationary while holding a heavy weight. Meanwhile, a concentric curl is when the muscle shortens up while you lift the weight upwards towards your chest — which is probably the classic image of someone performing a bicep curl.

However, there’s one more phase of the curl, the eccentric contraction. This is when the muscle is lengthening as you lower the arm holding a dumbbell away from the chest.

“Although the mechanisms underpinning eccentric contraction’s potent effects are not clear yet, the fact only a three-second maximal eccentric contraction a day improves muscle strength in a relatively short period is important for health and fitness,” Prof. Nosaka adds.

Lifting weights just got a lot easier for older adults

Study authors believe their findings are particularly important for older adults who may find working out for long periods of time challenging. The simple three-second workout may help to prevent the loss of muscle mass that comes with aging and immobility — at least in the arms.

“We haven’t investigated other muscles yet, but if we find the three-second rule also applies to other muscles then you might be able to do a whole-body exercise in less than 30 seconds,” Prof. Nosaka says. “Also, performing only one maximal contraction per day means you don’t get sore afterwards.”

The study is published in the Scandinavian Journal of Medicine and Science in Sports.