NEWARK, Del. — Imagine you were a bird residing in the northeastern part of the United States. Winter is coming. You and your family will soon be migrating to warmer temperatures far to the south. You travel mostly at night, so when you see the vast ocean of lights beaming from the many large cities you pass by, you’re drawn in. But what if you landed in Philadelphia — and you can’t escape?

That’s a problem that researchers from the University of Delaware say migratory birds are facing when they fly south each year, costing many of them their lives. They say flocks are being lured to major metropolitan areas by light pollution, falling victim to what they call “ecological traps.” Many birds are killed from crashing into buildings, and others struggle to find adequate resources to survive in urban settings.

The research team turned to 16 weather radars to track the flights of migratory birds over a seven-year period along the northeast. They monitored where the birds stopped along the way, snapping photographs of the massive flocks as they departed at dusk for the next leg of their trip. The team sought to determine what led the birds to choose each stopover location.

“We think artificial light might be a mechanism of attraction because we know at a very small scale, birds are attracted to light,” says Jeff Buler, an associate professor at the university’s Department of Entomology and Wildlife Ecology, in a media release. “Much like insects are drawn to a streetlight at night, birds are also drawn to places like lighthouses. Especially when visibility is poor, you can get these big fall-outs at lighthouses and sports complexes. Stadiums will have birds land in the stadium if it’s foggy at night and the lights are on.”

Buler and his team looked at the number of birds that were drawn to the most well-lit spots along the flight path — not surprisingly the major cities of the northeast:  Boston, New York, Philadelphia, Baltimore, and Washington. He says that the growing use of LED lights especially have become hazards because they emit far more light pollution than incandescent bulbs traditionally used on street lights and buildings.

“We found an increasing density of birds the closer you get to these cities. The effect goes out about 200 kilometers [about 125 miles],” he says. “We estimate that these flying birds can see a city on the horizon up to several hundred kilometers away. Essentially, there is no place in the northeastern United States where they can’t see the sky glow of a city.”

That glow, while inviting, also boosts the chances of an early doom for flocks. That’s because the birds aren’t familiar with city layouts nor the challenges for survival they face when looking for food and shelter. 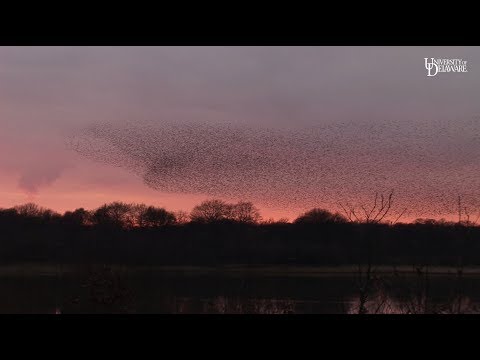 “One of the things we point out in this paper is that there might be negative consequences for birds being drawn to urban cities. We know there’s risk of collision with buildings, collision with vehicles, and getting eaten by cats, which are a major predator,” explains Buler.

Yes, feral cats are wreaking havoc on the winged visitors so much that Buler says they may be “the largest anthropogenic source of mortality for birds.”

And of course, flocks tend to cluster in the few areas that have most obvious forms of shelter and resources for them, such as city parks. This, in effect, causes those smaller settings to become overrun and depleted of resources.

So, while we may be mesmerized by the beauty of a baseball stadium on a fall night or the enormity of Times Square’s electronic offerings, our feathered friends are still trying to figure out exactly how to survive for a single day in these spots.

“If you think about it from an evolutionary sense, for all wildlife really, mammals and insects and birds, they’ve only been exposed to this light pollution for less than 200 years. They’re still adapting to the light,” says Buler.

The full study was published in the scientific journal Ecology Letters.

Battle of the sexes survey: Are men or women better at saving money?27 mins ago